Why Is Russia Stationing TU-22m3 Backfire Bombers in Crimea? 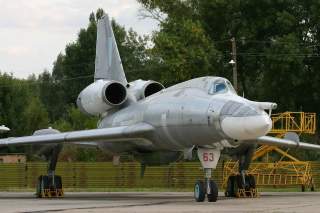 Key point: Moscow wants to ensure no one can creep up on and retake Crimea. Towards that end, it has stationed a lot of military hardware there.

The Russian air force has deployed "squadrons" of Tu-22M3 Backfire bombers to the Crimean Peninsula, which Russia illegally seized from Ukraine in early 2014. The deployment puts the bombers within close striking range of NATO countries and any U.S. Navy carrier battle groups sailing the Mediterranean Sea.

The bombers are a response to NATO's establishment of a ground-based missile-defense system in Romania in 2015, Russian senator Viktor Bondarev told journalists on March 18, 2019.

Bondarev's claim points to a pernicious and popular Russian conspiracy theory that for years has been undermining Moscow's relations with the West.

"The deployment of American missile defense systems in Romania came as a major challenge, in response to which the Russian defense ministry made the decision to deploy long-range missile-carrying bombers," Bondarev said. "This move has drastically changed the balance of forces in the region."

Bondarev said the bomber deployment, plus the basing of Iskander ballistic missiles in Crimea, prevent Ukraine, the United States and NATO from ever bottling up the Russian Black Sea fleet.

The Russian air force is upgrading 30 of its 67 Tu-22M3s to the new M3M standard with new engines and weapons.

"The recently improved Russian version of the Backfire, the Tu-22M3M, represents enhanced capability in virtually every area except stealth," Mark Schneider, an analyst with the National Institute for Public Policy, wrote in Proceedings, the professional journal of the U.S. Naval Institute.

Backfires flying from Crimea could lob missiles across the Mediterranean Sea.

"It were not for a prompt return of Crimea and [the port of] Sevastopol [on Crimea] within Russia, these territories would have gone under protectorate of the U.S.," Bondarev said. "The American ‘parent country’ would have immediately deployed its weapons systems there. In case of a war, obstacles could have been put without hindrance for our ships, for example through mining the floor of the Bosporus."

Moscow continues to detain the Ukrainian boats' crews. The European Union in response has threatened to impose sanctions.

Russia's official rationale for deploying forces to Crimea in part hints at a popular conspiracy theory. The Aegis Ashore missile-defense site in Romania specifically is designed to intercept ballistic missiles coming from Iran. It doesn't pose a serious threat to Russian forces.

But Aegis Ashores "play[s] to a very specific Russian fear," said Jeffrey Lewis, a nuclear expert at the Middlebury Institute of International Studies at Monterey.

The same conspiracy theory undermined the Intermediate-Range Nuclear Forces Treaty, an accord that for 32 years helped to limit the spread of medium-range atomic missiles.

In the early 2000s, shortly after the United States launched development of Aegis Ashore, Russia began testing a ground-launched nuclear-capable cruise missile that violated the terms of the 1987 INF Treaty. The cruise missile was Russia's first response to the notion that the West was planning to use Aegis Ashore to launch a sneak attack on Moscow.

In February 2019, citing Russian prevarications, the U.S. State Department formally notified Moscow of its intention to withdraw from the INF Treaty. The United States is developing medium-range nuclear missiles of its own, potentially fueling a new atomic arms race.

Now the same conspiracy that ultimately led to the demise of a key nuclear-arms treaty is driving Russia's deployment of long-range forces to Crimea.