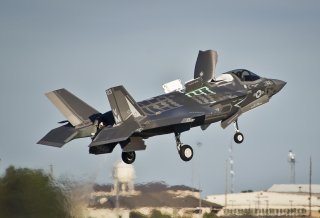 British newspapers are now reporting that the U.K. leadership intends to cut as many as 90 F-35Bs from its planned buy of 138, a massive development which, if true, would substantially reshape the country’s ability to project power throughout the region.

Thus far, the U.K. has committed to buy 48 F-35s by 2025, according to the British The Times, which cites that large-scale cuts to the F-35 are likely to emerge from the U.K.’s upcoming defense review “Global Britain in a Competitive Age.”

One thing which comes to mind is that the U.K. is not only surrounded by water but also of course borders the Baltic Sea, a region quickly accessible to Russian military forces. Being engineered for amphibious vertical take-off-and-landing, the F-35Bs could enable the British military to hold parts of the Russian coastline at risk of amphibious attack supported by 5th Gen aircraft.

There is also a large collective, NATO-specific element of this, to include multi-national surveillance, data-sharing, and intelligence coordination among F-35-member nations. Denmark, Norway, and The Netherlands, not to mention Italy, all operate F-35s, a group to be joined by Polish F-35s as well.

“A key advantage to the F-35 is that 12 other partner nations are operating the F-35 and there is a common network offering multi-level security,”  Ret. Lt. Gen. David Deptula, Dean of the Mitchell Institute for Aerospace Studies, told The National Interest in an interview.

While Deptula did not address the British F-35 circumstance specifically, he did seem to clearly refer to the F-35s communications network, enabled by Multifunction Advanced Data Link. MADL creates seamless interoperability and connectivity between F-35s, a circumstance that can enable distributed, mini-fleet F-35 attacks and help expedite joint-attacks or efforts to leverage the drone-like surveillance characteristics of the aircraft.

Through a MADL connection, one forward-operating F-35B could send reconnaissance details from the Baltic Sea to neighboring F-35 countries in a position to provide support. Geographical proximity within Europe is an interesting factor that contributes to and expedites this kind of interoperability. A vastly smaller force of British F-35s, it seems clear, might several impair this kind of operational efficiency for deterrence patrols or even attack missions on the European continent.

The British paper goes on to say that, in addition to F-35B cuts, the U.K. military may also cut upgrades and sustainment for its Typhoon aircraft in order to free up more funds for the stealthy British-Italian “Tempest” fighter slated to emerge by 2035.