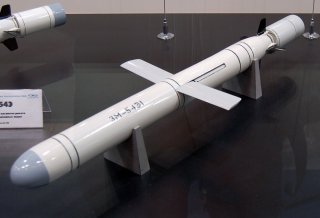 Key Point: As Moscow forges ahead with tests of additional experimental weapons for a looming nuclear arms race tied to the axing of key arms-control treaties, the potential for more such accidents is real.

At nine in the morning on August 8, 2019, an explosion resonated across the cold waters of the arctic White Sea. A missile had exploded lifting off from an offshore research platform near Nyonoksa, Russia.

Long-range missiles had been tested at a site adjacent to the rural town since 1965, and accidents were hardly unprecedented. In 2015, debris from an errant cruise missile rained onto a residential complex with a kindergarten on its ground floor, setting the building on fire but fortunately leaving residents unscathed.

Indeed, as many as fifteen may have been harmed in the accident. Locals tweeted ominous imagery of a Russian military helicopter landing and depositing Chemical, biological, radiological, nuclear (CRBN) specialists in hazardous-material suits who evacuated injured personnel in stretchers.

At least three testers were evacuated to the Moscow Federal Medical Biophysical Center, where two subsequently died from their injuries. Later, ten workers from a regional hospital involved in treating the injured were themselves reportedly flown to the Moscow center.

A notice was issued to ships that they could not enter a 250-square kilometer area close to the accident. The Serebryanka—a nuclear fuel carrier likely modified to recover radioactive fragments from the ocean—remained in the area, having been present near the platform prior to the test.

Not unrelatedly, twenty miles to the west, the major Russian shipyard city of Severodvinsk reported a spike in gamma radiation twenty times the norm around noon. Technically, this remained within safe limits, and by 4 p.m., radiation levels began to normalize.

However, the radiation levels at Nyonoksa itself would surely have been of much higher—possibly releasing radionuclides into the atmosphere and drinking water that could increase cancer risk and cause other adverse health effects to those exposed.

As reports of the accident circulated, Moscow claimed that it had been testing a “liquid fuel rocket.” Rosatom then stated it was working on an “isotope power source in a liquid propulsion system.”

By then a consensus had emerged among Western experts that Russia had been testing a prototype Burevestnik nuclear-powered cruise missile, which is codenamed the SSC-X-9 “Skyfall” by NATO. The weapon was one of several developed to circumvent the United States’ GMD anti-ballistic missile system, which Russia worries may undermine its nuclear deterrence despite GMD’s limited capabilities.

Putin had publicly unveiled the Burevestnik (which means “Petrel,” a type of seabird)—in a video showing a successful launch in April 1, 2018, alongside several other exotic new strategic nuclear delivery systems.

Theoretically, a cruise missile propelled by a nuclear-powered ramjet could travel at supersonic speeds out to practically unlimited range, skimming close to the earth and maneuvering around obstacles to evade long-range radars and air defense missiles.

However, Putin’s video didn’t show numerous failed tests, or that even the successful launch in November 2017 had gone to crash in the sea after flying only twenty miles. That means Burevestnik’s development is far from complete.

A companion article on the Burevestnik details more on the missile’s underlying strategic rationale, technical concept, and testing history, as well as a likely explanation for the accident on August 8.

Fallout from a Failed Test

Supposedly, the radiological event tied to the accident had been minor, and notices posted by regional officials were scrubbed from the internet. But locals were not convinced. In Severodvinsk and Arkhangelsk, demand for potassium iodide tablets, which reduce the thyroid gland’s intake of radioactive substances, skyrocketed and several pharmacies were sold out.

Then, as if the Russian state were keen to reenact historical events dramatized in the HBO series Chernobyl, four days after radiation levels were declared to have returned to normal, officials told Nyonoksa’s approximately 450 residents they would be temporarily evacuated by train for a few hours as a “routine measure.”

Given that locals insisted radiation levels really were normal, this may actually have been intended to conceal the personnel, equipment and debris involved in the clean-up. But as the alarming news resounded on the internet, the government backtracked and canceled the evacuation. Despite Moscow’s habitual obfuscation of the accident, internet social media made a coverup difficult to maintain.

The deadly incident near Nyonoksa is merely the latest in a string of major military accidents in Russia including a titanic explosion at an ammunition dump on August 5 that injured six, a fire onboard the Losharik nuclear-powered spy submarine that killed fourteen, and the sinking of a huge floating drydock in Severodvinsk which nearly resulted in the loss of Russia’s only aircraft carrier.

As Moscow forges ahead with tests of additional experimental weapons for a looming nuclear arms race tied to the axing of key arms-control treaties, the potential for more such accidents is real.