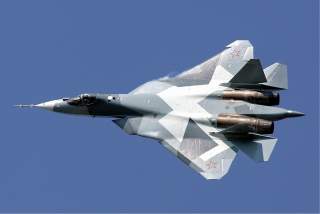 In fact, the majority of combat pilots have flown in Syria, Defense Minister Sergey Shoigu stated during a military conference.

“The figures speak for themselves here,” said Russian military newspaper Red Star.  “98 percent of the transport aviation crews and 90 percent of operational-tactical and army aviation crews, and also 60 percent of the long-range aviation pilots have already participated in the previously mentioned operations. Furthermore, nearly one-third of the air defense specialists - 32 percent of the servicemen - have confirmed their mastery and professionalism during the course of the fulfillment of missions in Syria.”

Russia’s intervention in the Syrian Civil War proved pivotal in saving Bashar al-Assad’s regime from defeat by Islamic rebels. While Hezbollah and Iran fought the ground war with troops and advisers that buttressed the sagging Syrian Arab Army, Russia flew constant and devastating air strikes against the rebels (and also killed numerous Syrian civilians). Russia had a chance to test numerous planes, including the Su-35 fighter, the Tu-160 strategic bomber, the Su-57 stealth fighter and various missiles and smart bombs.

Such testing was needed. As The National Interest has previously reported, the Russian military has admitted problems with its equipment, such as smart bombs that missed their targets in Syria because they had never experienced desert conditions while being tested in Russia. The U.S. military has also had its share of weapons that proved better in the laboratory than the battlefield. Today’s F-22 and F-35 fighters, and the deadly smart bombs and air-to-air missiles they carry, owe much to painful lessons learned during the Vietnam War, when American equipment and air combat tactics were found to be unsuitable.

The Vietnam War left the U.S. military devastated for a decade, but it did give the Pentagon a chance to grapple with the challenges of modern aerial warfare, such as anti-aircraft missiles, smart bombs and electronic warfare. The cost was more than 3,700 American aircraft destroyed, plus another 5,000 helicopters.

Russia’s Syria intervention has been far cheaper. Perhaps two dozen or so Russian jets and helicopters have been reported destroyed by enemy fire or accidents, including the accidental downing of an Il-20 surveillance aircraft by Syrian gunners (note that the Syrian Air Force has taken far higher losses).

In return, Moscow has been able to rotate large numbers of aircrew through Syria to gain experience, which they can then pass on to crews back in Russia. Russian Tu-160 and Tu-95 bombers fired cruise missiles at rebel targets in Syria. Syrian ground troops, along with their Iranian and Hezbollah allies, received plentiful air support from Su-24, Su-25 and Su-30 strike aircraft, as well as Mi-24 and Mi-28 helicopters. Some of Russia’s most sophisticated equipment, notably the Su-57 and Su-35 fighters, made at least cameo appearances in Syrian skies.

To make this happen, the Russian military had to be capable of mastering a variety of tasks. Mechanics, maintenance equipment and supplies had to be shipped or airlifted from Russia to Syria. Ground controllers and staffs had to plan and coordinate missions in a chaotic multinational environment, while forward controllers had to accurately call in airstrikes.

By the standards of America, which has been practicing overseas air warfare since World War I, this is old hat. But for Russia, this is a new experience, and one that will make Russian airpower both more competent and more confident.