Why the Shanghai Cooperation Organization Fails 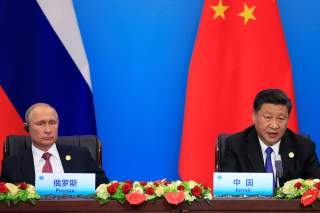 When Russian president Vladimir Putin and Chinese president Xi Jinping agreed to merge the Eurasian Economic Union (EAEU) and the Belt and Road Initiative under the auspices of the Shanghai Cooperation Organization (SCO) in 2015, the SCO appeared poised to become an indispensable middleman between Beijing and Moscow after years of struggling for relevance. With the recent conclusion of a free trade agreement between the EAEU and Beijing, Moscow and Beijing’s plans are finally translating into reality—but without the direction of the SCO. Now the SCO is neither a tight-knit security organization, nor a bridge between superpowers, but a glorified talk shop.

Since its formation, the SCO has struggled to craft an enduring mission. Established in 2001 by China, Russia, Kazakhstan, Kyrgyzstan, Tajikistan, and Uzbekistan, the SCO began as a counter-terror organization. But in 2004, the SCO broadened its mandate and began to restyle itself as a regional guarantor of peace and prosperity.

But as the SCO expanded its mission, it became beset by infighting between its two most powerful members, Russia and China. The taproot of the infighting was a large and growing disparity between the economies of the two countries. Unwilling to let go of its dominance in Central Asia, but unable to compete with Beijing economically, Moscow behaved increasingly as spoiler, throwing a wrench in Beijing’s initiatives whenever possible. When Beijing pushed for an SCO development bank and a free-trade zone starting in 2010, Moscow flatly rejected the idea of a free-trade zone and scuttled plans for a joint development bank by proposing alternatives it knew Beijing would reject. Instead of an SCO development bank with capital contributions proportional to GDP, Moscow pushed for Beijing to join the Eurasian Development Bank, in which Russia and Kazakhstan collectively owned nearly 100 percent of the stock.

If the goal of Moscow’s strategy of obstruction was to keep China out of Central Asia, then it backfired horribly: Instead of abandoning its ambitions, China simply began to work outside the framework of the SCO. In 2013, Chinese president Xi Jinping rolled out plans for a “Silk Road Economic Belt” (SREB) and then created the Silk Road Fund in 2014 and the multinational Asian Infrastructure Investment Bank (AIIB) in 2015.

For Moscow, the year 2015 was one of sobering reality as changing circumstances forced it to soften its stance and accept a lesser role in Central Asia. No longer the spoiler, Moscow redirected its efforts toward cooperation and began injecting its interests into Chinese initiatives. At the March 2015 Boao Forum in Beijing, Russian first deputy prime minister Igor Shuvalov announced Moscow’s decision to finally join the Asian Infrastructure Investment Bank. But the culmination of Moscow’s U-turn came in May 2015 when Vladimir Putin and Xi Jinping met in Moscow and pledged to merge the EAEU and the SREB. The deal envisioned the creation of a common economic space, with a free trade zone between China and the EAEU. The two leaders met again on the sidelines of the SCO’s July Ufa Summit and agreed that the SCO could serve as a middleman. By December 2015, the SCO’s new role was more or less official, with Chinese premier Li Keqiang and Russian prime minister Dmitry Medvedev signing a joint communique calling the SCO “the most effective forum” for negotiating the merger of the SREB and the EAEU.

Although the groundwork for the SCO’s success had been laid, the issue of a free-trade zone became a serious sticking point. Despite having agreed to work toward a free-trade zone back in May 2015, Moscow remained lukewarm on such an arrangement. In December 2016, Yevgeny Vinokurov, an economist at the Eurasian Development Bank, wrote that the EAEU is “not yet ready to open its market to Chinese manufacturers.” By April 2017, Moscow had all but walked back its pledge as Russia’s  Special Representative for SCO affairs stated that Moscow was in no rush to establish a free trade zone. When the EAEU and China finally struck a deal on a free trade zone in May 2018, the SCO served not as a go-between, but merely a platform to tout the achievement, with SCO leaders pouring praise on the deal at the recent Qingdao Summit.

In retrospect, Moscow and Beijing’s decision to sideline the SCO should have come as no surprise. When the SCO  admitted India and Pakistan in 2017, despite the apparent risk that tensions between New Delhi and Islamabad would significantly reduce the organization’s cohesion, it became clear that Moscow and Beijing had begun to think bigger. Instead of turning the SCO into a platform for regional integration, Moscow and Beijing sought to transform the organization into a forum for the region’s heavy weights.

Experts lamented the decision. Carnegie Moscow’s Alexander Gabuev, for example, argued that India and Pakistan would make the SCO “more ceremonial and less viable.” Future expansion, however, seems to be not a matter of if, but when. At the recent Qingdao Summit, Xi proclaimed, “more member states means greater strength of the organization as well as greater attention and expectations of people of regional countries and the international community." Meanwhile, the SCO continues to flirt with full membership for Iran and, to a lesser extent, Afghanistan.

The SCO now looks much more like the G-7 than an effective international organization. And much like the G-7, the SCO will continue to make headlines when leaders gather to propose their agendas for foreign consumption. But without a clear mission or cohesion among its growing body of members, the SCO will struggle to produce concrete achievements.

Anson Sidle is a U.S.-Russian Relations Intern at The Center for the National Interest.

Shanghai 1937: This Is China’s Forgotten Stalingrad