Why Singapore's Navy Should Be Taken Seriously 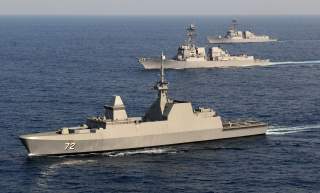 Key point: Singapore has the money and intention to maintain a well-equipped and disciplined Navy.

A tiny yet wealthy city-state, Singapore is a major financial hub of Asia. While this moneyed image has become the mainstream depiction of Singapore, many are unaware of the fact that Singaporean armed forces are active contributors to the security of the region, and in particular its navy has been actively patrolling the regional waters alongside other regional navies against any potential threats, including piracy.

Singapore’s navy, officially known as the Republic of Singapore Navy (RSN), has been shaped over the years into a maritime force that is highly sophisticated and well-trained. The RSN was even ranked among the top five Asian navies by The National Interest article.

Singapore intends to build a navy that could protect its territories and economic interest from the potential hostility by any immediate larger neighbors (like Malaysia), and more importantly a navy that could become lethal if combined with other regional and extra-regional navies (like Australia, India, Indonesia and Japan) against a powerful navy (like Chinese navy).

Singapore, therefore, plans to acquire more advanced capabilities for its navy, including renewing its submarine fleet, acquiring new vessels with potential to serve as an aircraft carrier and adding unmanned platforms to its defense machinery.

As part of its submarine force renewal program, the RSN is acquiring four Germany-made Type 218SG submarines. This new submarines will be having far more improved operational and combat capabilities -- and are built to stay submerged about 50% longer -- than those of the existing ones.

It’s worth mentioning here that submarines -- unlike surface warships that have both peacetime and wartime functions -- are built to shoot and destroy targets as well as to conduct surveillance, even surveilling foreign coasts to gather vital intelligence. The very fact that a small city-state like Singapore has submarines in operation and is now renewing its fleet with even more capable submarines -- shows how ambitious the Singaporean navy has become about increasing its naval power.

Because of the larger capacity, these submarines could be upgraded in future to accommodate weapon systems, such as long-range missiles to carry-out an offensive strike.

There's more to Singapore’s naval ambitions. With full-length flight deck, the upcoming Joint Multi-Mission Ships (JMMSs) would be almost 540 feet long with an estimated displacement of around 14,500 tons and are expected to carry five medium and two heavy helicopters on a flight deck. What's more, these vessels could potentially support limited operations of fixed-wing aircraft, including the F-35B warplanes which Singapore airforce is expected to purchase from the U.S. sometime in the near future. Therefore, these vessels could potentially serve as aircraft carriers.

Singapore's navy leadership also knows that they need unmanned drones and unmanned vessels having cameras and weapons to extend their reach and flexibility against threats. These unmanned drones and vessels will allow the motherships to see farther and respond quicker. Hence, the RSN plans to procure new vessels -- including new Littoral Mission Vessels (LMVs), new Multi-Role Combat Vessels (MRCVs) and the aforesaid JMMSs -- which will be having multiple unmanned air and surface vehicles.

An Asian financial hub, the city-state of Singapore, has a lot of wealth. The tiny landmass of the state and the already developed infrastructures allow the Singaporean government to allocate comparatively lesser wealth on infrastructure and other conventional sectors and to invest more on innovation and technology as well as defense and security. This is how the tiny state affords to make quality defense procurement.

Singapore has been the Southeast-Asia's largest military spender for several years now. Singapore was the top regional military spender in 2018 with an expenditure of US$10.8 billion and the Southeast Asian neighbor with the closest figures was Indonesia with an expenditure of US$7.4 billion. For 2019, Singapore has allocated US$11.4 billion for defense on its budget -- something which amounts to about 19 percent of total government expenditures and around 3.3 percent of national GDP.

This first appeared in RealClearDefense here in August 2019.