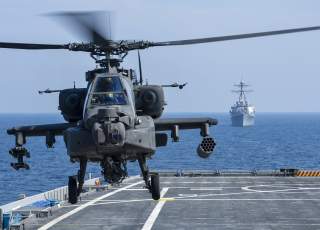 The 601st Air Cavalry Brigade is equipped with 29 Boeing AH-64Es in a $1.9 billion sale by the Obama administration in 2011. Though the deal was denounced by China, the 30 helicopters (one crashed into a building during a 2014 training flight) were delivered in 2013 and 2014, and the two Apache squadrons have since been training for their debut.

"The 601st brigade is responsible for the defense of Taipei and the rest of northern Taiwan," according to Asia Times. "It has two combat squadrons that provide air support alongside armor, artillery, special forces and infantry units." The Apaches will be supplemented by Taiwan's 61 AH-1W SuperCobra attack helicopters. Their counterparts across the Taiwan Straits are Communist China's Z-10 attack helicopter.

There is no doubt that the AH-64E is a powerful weapon. Armed with a Longbow radar, 16 Hellfire anti-tank missiles or four Stinger anti-aircraft missiles, the Apache can deliver a horrific amount of firepower. A brigade of 29 Apaches is even more deadly.

Yet while the AH-64 has an iconic reputation as a tank-killer, tanks are far from the biggest threat that Taiwan faces. While China has beefed up its amphibious capabilities, depositing large numbers of tanks on Taiwanese beaches in the face of Taiwanese -- and probably American -- air and naval power would be a daunting task.

"If the PLA [China's People's Liberation Army] manages to land a large number of tanks, something went horribly wrong on the defending side," says Michael Thim, an expert on Taiwan's military. "Like all elements of Taiwan's defense forces, the AH-64Es are expected to contribute to anti-landing efforts, including offshore and onshore engagement. That could include attacking landing craft during final approach or attacking PLA forces that manage to disembark."

Thim expects that in the event of war, Chinese aircraft and missiles would attempt to destroy the Apaches on the ground, though this would not be an easy task. "Given Taiwan's mountainous terrain and the AH-64Es ability to acquire target and fire from behind cover, Apaches are quite a potent weapon for the purpose Taiwan needs them for."

But these are tactical issues. The ultimate question is whether 29 helicopters will change the balance of power between China and Taiwan, or whether the Apaches are largely symbolic.

"It is clear that this does not really help to restore any semblance of military balance, which was lost a long time ago," Thim says. "But it is not a symbolic acquisition, either. The PLA will be desperate to land as many troops as possible in the shortest possible time. A brigade of Apaches gives Taiwan another tool to make the Chinese think twice before they commit to an attack. Apaches would be also useful in scenarios other than full-scale invasion, such as a decapitation attack aimed at Taipei and Taiwan's political leadership, or special forces attacks on key military installations. These are situations in which timely deployment of attack helicopters, either Apaches or Cobras, can play a crucial role."