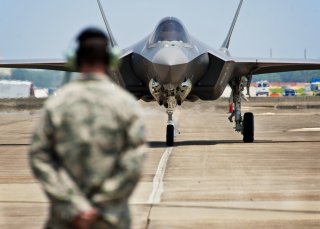 The Air Force is preparing to arm its F-35A variant fighter jets with a nuclear bomb attack capability. This would add another stealth aircraft to the Defense Department’s nuclear deterrence posture.

Although the B-2 Spirit is nuclear-capable and has been undergoing testing in advance of being outfitted with the upgraded B61-12 nuclear bomb. Now, the Air Force is doing test runs with the F-35 fighter jet in preparation to certify the stealth fighter to carry nuclear weapons.

Many aircraft can carry nuclear weapons, including the B-52 Stratofortress and even some of the fighter jet variants such as the F-15E Strike Eagle and F-16C/D Fighting Falcon. Arming a stealthy fifth-generation aircraft with air-dropped nuclear weapons capability introduces new, potentially unprecedented variables. An Air Force press statement notes that two F-35A jets released B61-12 Joint Tests Assemblies as part of a final flight test exercise to certify the aircraft to carry nuclear weapons.

Nuclear certification is broken up into two phases including nuclear design and a nuclear operational certification, according to the Air Force.

“This test is considered the graduation flight test exercise for the F-35A nuclear design certification and concludes on-aircraft testing for the initial nuclear certification effort,” the Air Force press statement explains. “The test data received from this event is currently under analysis and review by the Department of Defense and Department of Energy to ensure the F-35A and B61-12 JTAs performed correctly throughout all phases of the operation.”

A nuclear-armed F-35 jet would introduce a new dynamic to America’s nuclear deterrence strategy. The speed of an F-35A variant, especially if it is operating in the vicinity of a conflict area, could deliver a nuclear response to any kind of a first strike faster, essentially shortening the response curve. For example, should the United States unexpectedly come under nuclear attack, then a nuclear-armed F-35 jet might be in a position to retaliate in a fast and impactful way more immediately, whereas an intercontinental ballistic missile can take up to a half an hour to transit through space en route to a target. A B-2 Spirit could hold an enemy of the United States at risk of a nuclear attack even though it might lack the maneuverability and lower-altitude speed to bring a nuclear strike more directly into a warzone full of enemy aircraft, maneuvering ground forces or newly arriving intelligence information with updated targets.

Essentially, a nuclear-armed F-35 jet could go from participating in a conventional air-to-air or air-to-ground engagement into conducting a nuclear attack should combat conditions and circumstances change quickly. These recent developments represent a large step forward toward deploying a nuclear-armed F-35A variant. The plan to arm the fifth-generation jet with nuclear weapons goes back several years to the 2018 Nuclear Posture Review. This integrated plan was designed to strengthen the U.S. nuclear deterrence posture.