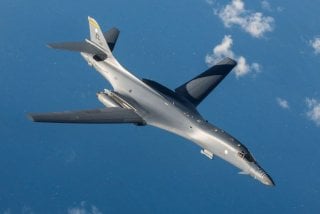 Last week two U.S. Air Force B-1B Lancers took part in a 24-hour drill—flying from Andersen Air Force Base, Guam to conduct training in Alaska and Japan. The B-1B bombers were assigned to the 9th Bomb Expeditionary Squadron, and while over Alaska were joined by F-22s and F-16s out of the 3rd Wing at Joint Base Elmendorf-Richardson. The aircraft conducted a large force employment exercise in the Joint Pacific Alaska Range Complex, after which the bombers flew southwest to Japan and completed familiarization training in support of the U.S. European Command objectives.

The two bombers then flew south to integrate with elements from the USS Ronald Reagan, including a P-9 Poseidon. They conducted Long Range Anti-Ship Missile training before completing the exercise and returning to Guam.

The two B-1B Lancers heavy bombers were among the four that were rotated back to Guam earlier in May as part of a “deterrence mission” aimed at countering Chinese aggression in the region. Four bombers and approximately 200 Airmen form the 9th Expeditionary Bomb Squadron, 7th Bomb Wing, Dyess Air Force Base, Texas, were deployed to support the Pacific Air Forces’ training efforts with allies, partners and joint forces.

“These missions demonstrate our ability to hold any target at risk, anytime, and anywhere,” said Lt. Col. Ryan Stallsworth, 9th EBS commander. “The training value of these sorties is irreplaceable…our team conducted large force exercise training around Alaska with U.S. Air Force fighters, we conducted multiple standoff weapons training events, as well as integrated with U.S. naval assets along the way. From a readiness perspective, it is hard to think of a more valuable training sortie.”

The B-1s first returned to the theater in January to conduct long-range BTF missions from Ellsworth AFB, South Dakota, to integrate with U.S. Air Force F-16s and the Koku Jieitai (Japanese Air Self Defense Forces—JASDF) F-2s and F-15s.

The mission allowed the B-1 crews to gain valuable training in being able to familiarize with air bases and operations in different Geographic Combat Commands’ areas of operations.

Despite the fact that the B-1B is able to be used in such missions, it is one of several aircraft that the Air Force has proposed divesting in its 2021 budget. This would reduce the bomber fleet from 61 B-1B aircraft to just 44 by next year, Business Insider reported. The remainder would then go out of service to be replaced by the B-21 bomber, which is set to arrive in the mid-2020s. However, for now the B-1B remains the “backbone” of the U.S. Air Force’s bomber fleet. The aircraft, which can top 900mph, has the largest payload for a bomber and can carry up to 75,000 pounds of guided and unguided weapons.

The B-1B Lancer is also noted for its variable-geometry wings that are designed for both supersonic and subsonic speed. The National Interest previously noted that it proved popular in Afghanistan, where its combination of high speed, long-range and high payload capacity also meant that it could serve as a ground-attack-support platform, despite it being originally designed as a nuclear bomber.

However, one of the issues has been that the B-1B Lancer bore much of the workload during the war on demand, and the effort to keep the bombers flying meant that the Air Force had to retire some aircraft and focus on maintaining the ones in better shape.