Why U.S. F-35s, Stealth Bombers and Attack Drones Could Fail in a War 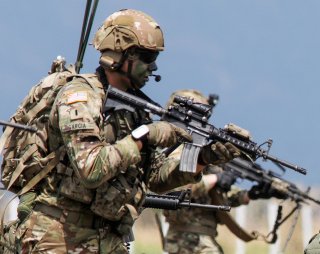 Fighter jets, stealth bombers, attack drones and air-traveling missiles all need to “operate at speed” in a fast-changing great power conflict era. What that means is that “sensor to shooter” time (how fast data can go from a sensor to a war-fighter) needs to be drastically sped up. Without that speed, warfighters won’t be able to react as quickly to threats and it will be harder to win.

When faced with fast, multi-frequency, long-range precision fire from enemy air defenses, air attackers simply must “operate at speed,” according to U.S. Air Forces, Europe Commander General Jeffrey Harrigian, who used the phrase in a discussion with The Mitchell Institute for Aerospace Studies.

Harrigian, who is also now the Commander of U.S. Air Forces Africa, ran much of the air campaign during Operation Inherent Resolve against ISIS; he offered a first-hand war perspective in a conversation with retired Lieutenant General David Deptula, Dean of the Mitchell Institute.

The opportunity to operate with air supremacy in uncontested environments is, essentially, over, as joint forces prepare for warfare in high-threat areas against advanced enemy forces, sophisticated air defenses and rival fifth-generation stealth fighters. U.S. forces, of course, enjoyed overwhelming air superiority during the years of counterinsurgency in Iran and Afghanistan, a circumstance enabling most key combat decisions to travel all the way up the echelon into an “air operations center.” Now, warfighters and commanders themselves operating at the edge of combat will need to be empowered to make more decisions independently for a simple reason: the speed of attack.

“Years of operating in uncontested environments provided an opportunity to have some time to make decisions and bring them back into a command center. When troops are in contact and you start targeting in a dynamic environment, you don’t want to over centralize. Let your commanders operate, and trust the guys at the tip of the spear,” Harrigian said.

While pilots and Commanders have of course always had the ability to respond as needed under enemy fire or in intense combat situations, newer threats and advanced, long-range sensor technology will require forward-attackers themselves to operate with even more autonomy.

Advanced command and control technologies, including AI applications and sensor networking is also expected to greatly expedite this kind of tactical approach, as air fighters and Commanders on the ground are likely to have a more immediate, informed sense of specific circumstances. Should an enemy fifth generation fighter or long-range air-attack be incoming, pilots and Commanders simply will not have time for a full complement of high-echelon Commanders to make a decision regarding counterattack. These combat Tactics, Techniques and Procedures provide key parts of the conceptual inspiration for the Pentagon’s emerging Joint All Domain Command and Control (JADC2) program.

The tactical concept, Harrigian explained, is to “trust the guys at the tip of the spear who understand Commander’s intent.”

“As commanders we need to do a better job of how we provide intent to support decisions in flight. At the end of the day you need to go from sensor to shooter as quickly as possible,” he added.

During the course of his discussion with Harrgian, Deptula asked about how his experience as an Air Commander fighting against Russian-built air defenses has influenced his tactical thinking. Harrigian specifically cited Russian weapons as an area of particular concern.

“We don’t want to train every three months. We need muscle memory fighting against air defenses,” he said.