Why the U.S. Navy Never Built Titanium Submarines Like Russia 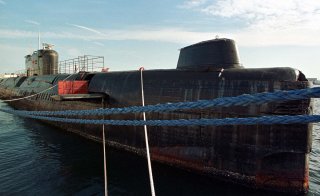 There’s a reason for why the U.S. Navy passed on titanium submarines.

Project 705 Lira, better known by its NATO designation Alfa, was among the most innovative Soviet submarines of the 1960s. Powered by a technically impressive lead-cooled fast reactor design, the Alfa class registered performance numbers that remain unbeaten to this day. Lira is the fastest serial submarine ever built, second only to the prototype Papa-class submarine. It could also operate at a depth of twenty-two hundred feet, far outmatching even its contemporary NATO counterparts. These innovations were enabled, in no small part, through the Alfa’s revolutionary use of a titanium alloy hull. An extremely light and durable metal, Titanium brings several advantages over a standard steel hull construction. A titanium construction facilitates higher pressure tolerances, allowing a submarine to operate at significantly greater depths. As seen with the Alfa and Papa classes, the comparative lightness of titanium bears the potential for record-breaking speeds. The metal is likewise resistant to corrosion and paramagnetic, meaning that it can be harder to detect by naval vessels using magnetic anomaly detectors (MAD).

The Alfa’s impressive performance prompted alarm from the U.S. military, which expressed concern that the Alfa travels too fast, and too deep, to be reliably countered by the U.S. Navy’s existing arsenal of anti-submarine torpedoes. But Washington, wisely, did not try to reproduce Soviet advancements in submarine design. Instead, the navy invested in new, high-speed anti-submarine warfare (ASW) weapons—such as the Mark 48 Torpedo—that were thought to be capable of catching Alfa boats.

In hindsight, there are numerous reasons why the U.S. Navy did not follow the Soviet shipbuilding industry down the path of titanium hulls. To begin with, titanium is an extraordinarily rare and expensive metal that’s much more complex to process than iron. Titanium panels are more difficult to bend into shape, especially on the scale of military submarines. To be successfully manipulated, titanium had to be handled in specially constructed, argon-infused warehouses by trained welders equipped with an outside supply of oxygen. A costly and time-consuming process of trial and error reaffirmed that titanium is subject to embrittlement by hydrogen at higher temperatures, potentially causing design imperfections that may compromise the submarine’s structural integrity.

There was simply no conceivable supply chain in place to make the serial production of titanium even remotely cost-efficient. The Papa-class prototype cost an astonishing 1 percent of the Soviet Union’s entire 1968 GDP, and that doesn’t factor in titanium’s unique maintenance and component degradation costs.

For the U.S. military, it was exponentially cheaper and markedly more effective to develop torpedo countermeasures against titanium-constructed boats than to embark on the uncertain journey of copying costly Soviet designs.

There is little question that the Alfa’s titanium construction was groundbreaking—so much so, that some U.S. intelligence operators refused to believe it at first—but some innovations are meant to be merely studied rather than emulated. The Soviets’ ill-fated attempt to serially produce titanium submarines is certainly one of them.