Why a Utility Helicopter Delivered in the 2030s Will Change Everything 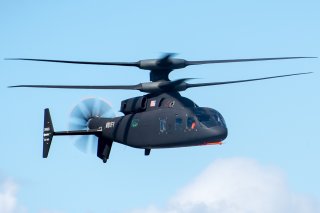 What would it mean to future warfare if an armed, high-tech utility helicopter could deliver troops for attack under hostile fire, MEDEVAC injured soldiers on the brink of death, conduct high-risk reconnaissance missions in dangerous areas, and bring critical supplies to the edge of combat —all while traveling three hundred miles per hour?

The Army is hoping to find out with the Future Long-Range Assault Aircraft (FLRAA) program, a developmental effort to engineer and deliver a new utility helicopter for the 2030s. The helicopter will change air combat paradigms with unprecedented speed, fuel efficiency, targeting, weapons, autonomy and artificial-intelligence-enabled computing.

The new FLRAA aircraft is now amid digital design development, testing and further technical refining through Army developmental deals with both Sikorsky-Boeing and Bell Helicopter developers. Ideally, the new FLRAA will fly twice as fast and twice as far as an existing Black Hawk.

This technical ability could easily translate into speeds as fast as three hundred knots and a combat radius close to five hundred kilometers. The tactical advantages of this kind of range and speed are too numerous to fully delineate. Primarily, it will eliminate the risk associated with needing forward-arming and refueling points. FLRAA aircraft will not have to stop mid-mission at small manned outposts vulnerable to enemy fire in order to refuel, due to more fuel-efficient engines and much faster speeds.

Sikorsky’s DEFIANT X, and Bell’s V-280 Valor, are described as compound helicopter configurations aimed at engineering an aircraft able to maneuver and hover in position like a helicopter, yet also succeed in reaching and sustaining airplane-like speeds. The DEFIANT X, for example, advances what is referred to as a “coaxial rotor system.” The DEFIANT X's predecessor, called SB > 1 DEFIANT is reported by Sikorsky developers to have reached speeds greater than 230 knots, adding that innovators continue to push the envelope beyond that through prototyping and digital design modeling with the DEFIANT X.

Developers of the DEFIANT X have worked on specific innovations to decrease or even remove what’s called “Retreating Blade Stall,” by building rigid, counter-rotating rotorblades. The rigid rotor blades are designed to mitigate pockets of instability in the air called “blade stall” which could otherwise destabilize flight trajectory. The concept is to enable rapid, flexible and decisive maneuvering such that arriving infantry can stop at an objective, unload infantry and then immediately leave a danger zone.

“In a traditional helicopter, as you move through the air the lift across the rotor disc becomes uneven based on the relative wind created by your forward speed,” Jay Macklin, Sikorsky’s business development director for the Future Vertical Lift program told the National Interest. “As you accelerate the ‘advancing blade’ (on the right side of the helicopter) feels more relative wind than the ‘retreating blade.’ To account for this imbalance the retreating blades must increase their pitch angle so that the lift is equal on the right and left sides of the helicopter. At some point, this pitch angle becomes so great that the blade stalls [stops producing lift], hence the name, ‘retreating blade stall.’”

Sikorsky engineers have said that a coaxial rotor system spins its upper and lower blades in opposite directions such that there is not a “retreating side” that creates a flight imbalance. The retreating blade side is referred to in a Lockheed-Sikorsky-Boeing paper as a “reverse velocity region” which “cannot produce lift,” especially at higher speeds. Offsetting this potential instability, therefore, can help enable and sustain much higher speeds without compromising lift.

Achieving and maintaining unprecedented “lift” is also fundamental to design concepts and requirements assessments for the DEFIANT X, as the new utility helicopter will need to operate with an ability to “sling load” major combat items such as an M777 155-millimeter mobile Howitzer cannon. Air dropping that kind of weapon can, of course, deliver critical suppressive firepower up at higher altitudes unreachable by wheeled vehicles.

Sikorsky-Boeing data on the DEFIANT X says that the aircraft can handle the additional weight without having to grow the rotor diameter or the engine size. So, any additional equipment, survivability features, payload (including external lift) can be handled without a significant and costly redesign of key dynamic components. On this point, a Sikorsky write up says the DEFIANT X’s predecessor was able to slingload a fifty-three thousand pound Guided Multiple Launch Rocket System.

One of the key things often emphasized by major Army weapons developers, such as Army Futures Command Commander Gen. John Murray, is that new technologies continue to change tactics and maneuver formations. That being said, will a new FLRAA reshape approaches to Combined Arms Maneuver? It certainly seems likely, should one consider that a faster helicopter might also be able to maneuver much more successfully in operations such as air assault raids of high-speed infantry delivery in a contested landing zone.

The DEFIANT X builds upon Sikorsky’s history of developing coaxial rotor blades to break new ground with its X2 Technology Demonstrator in 2010 by hitting 250 knots. Bell developers have told the National Interest that their V-280 has hit 305 knots. X2 Technology Demonstrator set new records by flying more than 250 knots in 2010. Sikorsky’s S-97 Raider helicopter in 2019 hit 207 knots. Sikorsky continues to expand the envelope as they prepare the RAIDER X prototype—a scaled version of the S-97—for the Future Attack Reconnaissance Aircraft competition.