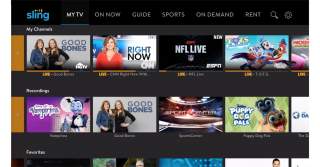 Cable TV packages, even on the streaming side, seem to be getting more and more expensive by the day. For Sling TV, it could no longer hold out on its own price hike, as it did so several months back.

Now, Sling TV is no longer a shoo-in for those bargain hunters out there. With a $30 entry-level package and a $45 combo package, perhaps spending that extra $5 or $10 will land you a TV service that isn’t so convoluted in both its pricing and channel lineups.

Like its chief competitors, Sling TV also does away with cumbersome contracts, so if you don’t like the service after a few months, you can click on that cancel button and go on your way. No hurt feelings whatsoever.

For the base package, Sling TV offers the Orange (32 channels) and Blue (47), for which the channels are split up in a way that steers you to the combo package (both Orange and Blue).

For example, one lineup will have ESPN, while the other will have Fox Sports. Also note that the Orange package has zero local channels. So, if you’re a sports nut or have children who enjoy age-appropriate programming, the obvious choice is the 50-plus-channel combo package.

As for ease of use, Sling TV can’t compete with the smoother interfaces of Hulu Live TV or YouTube TV. Moreover, where Sling really lags behind its competitors is in its DVR storage, as it only offers 10 hours free (way, way too small to be of any use) for cloud DVR and $5 per month for 50 hours. In comparison, YouTube TV offers unlimited DVR storage.

Other than the low entry price point, Sling TV offers a pretty pedestrian TV experience. Keep in mind that YouTube TV is $50 per month, Hulu Live TV $55 and AT&T TV Now $65. All three of these examples have a more extensive channel lineup without the hassle of choosing which package is a better fit.

Your monthly bill, however, can skyrocket with just a couple of add-on packages, for which there are over a dozen to choose from. For example, the Sports Extra package boasts NFL RedZone, NBA TV, NHL Network, beIN Sports and ESPN Bases Loaded, all for an extra $5 per month. NBA League Pass will set you back $29 per month, and the HBO package will cost the standard $15, while Showtime $10.

As one can easily see, add in the DVR fees and these extra packages, suddenly the monthly cable bill could be in the $70 to $90 range -- inexcusable pricing that Sling TV took aim at when it first launched.

Yes, the low entry fee into streaming live TV is indeed a blessing, but if you’re in the market for a more simplified channel lineup without the costly add-on features, just go with YouTube TV or Hulu Live TV. You’ll probably save yourself from future headaches.