Will AI Be the Secret to Hypersonic Missile Defense? 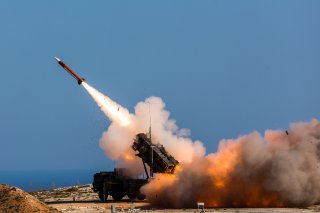 The challenge for hypersonic missile defense is to establish a continuous track of a weapon moving more than five times the speed of sound while implementing a countermeasure, such as an interceptor or jamming method to disrupt the missile’s flight trajectory or airflow.

Either of these options would be reliant on the speed of information transmission, which is why the Missile Defense Agency and industry partners are working on a number of programs to establish a continuous track.

When a missile traveling that fast passes from one radar field to another, it could be lost in transition and therefore need to be reacquired. This can impede any continuous tracking ability and complicate efforts to establish a track loop sufficient to destroy the attack.

In order for the Pentagon’s nascent Glide Phase Interceptor weapon to be effective against a hypersonic missile traveling through space at more than five times the speed of sound, the missile needs to be seen. But if the weapon is traveling so fast that it transitions from one radar field to another, can the tracking information be shared fast enough to enable an interceptor to “lock on” to its flight path?

Networking and processing this kind of data is the reason why the Pentagon is developing a new Hypersonic Ballistic Tracking Space Sensor technology which will establish a continuous track of fast-moving hypersonic missiles from “beyond-line-of-sight” by networking small satellites to one another and using high-speed, AI-enabled computer processing to connect time-sensitive detail with ground terminals, command and control centers, and human operators.

“The current HBTSS satellite is a demonstration system, and the communication networking link will be through the ground. The HBTSS demonstration data will downlink to the ground Command and Control and Battle Management Communication (C2BMC) which will integrate the data with other OPIR sensors,”  Nikki Noushkam, senior manager, OPIR and Geospatial Systems, Northrop Grumman, told The National Interest in a statement.

Some of the data processing, for instance, could potentially be AI-enabled and also performed at the point of data receipt when sensor data first arrives.

Computer processing is becoming much faster and a series of technical breakthroughs are allowing for incoming sensor data to be instantly analyzed, organized, assessed, and streamlined. With this, key points, moments, or objects of relevance can be found and sent to commanders at speeds exponentially faster than what may have previously been possible.

This means that critical data such as anticipated flight path, landing time, and location, as well as things such as speed and altitude, can be calculated by advanced computer algorithms able to bound incoming specifics off of a huge, seemingly limitless database to make comparisons, examine similar past scenarios and establish near real-time analytics to organize data, find optimal courses of action and relay them to human decision makers through a fire-control, sensor-to-shooter loop that is exponentially faster than what had previously been possible. Most of all, it enables a fast exchange of information across previously disaggregated areas or “segments” of detection.

“We are very confident that the HBTSS Phase 2B demonstration satellite will launch in 2023. The acquisition plan to transition the HBTSS Fire Control tracking quality capability into an operational constellation for the warfighter is currently being assessed by the DoD,” Brown added.