Will Armenia and Azerbaijan’s Nagorno-Karabakh Clashes Lead to War? 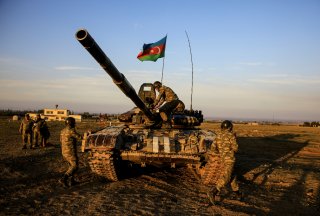 Deadly clashes have erupted in the Nagorno-Karabakh region over one year after the signing of a fragile Russian-brokered ceasefire agreement.

Azerbaijan said on Wednesday that its forces suppressed an Armenian attack near the enclave of Nagorno-Karabakh. Azerbaijan’s Defense Ministry accused Armenian forces of killing a soldier in an act of sabotage and attempting to seize territory controlled by Russian peacekeepers, according to Reuters. "We emphasize that the reason for the recent tension is the presence of illegal Armenian armed troops in the territories of Azerbaijan," Baku claimed.

Armenia has rejected Baku’s framing of the clashes, with Prime Minister Nikol Pashinyan claiming there are no Armenian servicemen in the Nagorno-Karabakh region. "Today, Azerbaijan is talking about the Nagorno-Karabakh Defense Army and the reasons why it is deployed along the line of disengagement. If Russia’s peacekeeping contingent and Azerbaijan provide guarantees of this line’s inviolability, the defense army, I believe, will not have to remain on combat duty. Also, I officially declare that there are no military servicemen from Armenia in Nagorno-Karabakh," he said.

Pashinyan appeared to blame the recent spike in military tensions on a lack of action by Russian peacekeepers stationed in the broader Nagorno-Karabakh region. "Questions arise in Armenian society over the Russian peacekeeping operation in Nagorno-Karabakh," he said during a government meeting, adding that the role of the Russian mission must be “clarified.” Armenia has accused the Azerbaijani side of violating the terms of a ceasefire agreement by attacking territories controlled by the peacekeepers. Yerevan officials have called on the international community to “stop the aggressive actions and attitude of Azerbaijan and to activate the necessary mechanisms to do so.”

Russia’s Defense Ministry has accused Azerbaijan of violating the ceasefire, adding that it is "taking measures to stabilize the situation" in consultation with Yerevan and Baku. "There are trilateral agreements, which serve as the starting point," said Kremlin spokesman Dmitry Peskov on Thursday. "The most important is to implement all obligations, which the parties assumed under these documents."

The European Union, the Organization for Security and Co-operation in Europe, and the Biden administration have called for an immediate end to hostilities in Nagorno-Karabakh. “The United States is deeply concerned by and closely following reports of intensive fighting around Nagorno-Karabakh, including casualties and the loss of life,” said U.S. Department of State spokesperson Ned Price. “We urge immediate steps to reduce tensions and avoid further escalation,” he added.

Azerbaijan’s armed forces launched an offensive to retake the ethnically Armenian breakaway enclave of Nagorno-Karabakh, internationally recognized as part of Azerbaijan, in the Summer of 2020. The six-week Nagorno-Karabakh war ended with a Kremlin-brokered ceasefire agreement involving the restoration of several surrounding territories under Azerbaijani control and the deployment of some 2,000 Russian peacekeeping forces to the region.