This Will Be the Marine Corps’ Eyes and Ears at Sea 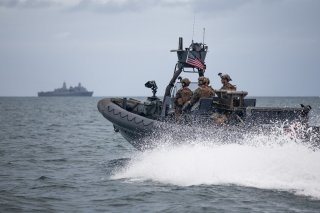 The United States Marine Corps is mating an American sensor suite and communications package to an Australian multimission boat to give the Marines a crucial small boat reconnaissance capability at sea.

The boat, manufactured by Whiskey Project, will give the Marine Corps a “Sense First, See First, Strike First solution” by leveraging American “tactical networks and situational awareness tools” and the boat’s low-signature design.

Whiskey Project company material explains the novelty of their boat, stating that “integrating fit-for-purpose features and leading technologies never before collectively applied to a combatant craft—and featuring the world’s most technically advanced powerboat hull—WHISKEY MMRC (Multi-Mission Reconaissance Craft) is a purpose-built multi-mission combatant craft that vertically integrates with personnel and C3 systems and is specifically built to meet the operational needs of the contemporary warfare environment.”

The MMRC platform is customizable and can carry out a variety of missions, including “organic littoral manoeuver from the sea to support surveillance, collections, target acquisition, battlespace shaping, and reconnaissance, whilst reducing its signature from adversary sensors. It extends the operational reach of commanders and facilitates multi-domain collaborative operations whilst providing a mission configurable platform compatible with Air/Rotary wing and Navy ships.”

Company material indicates that the boat can accommodate four weapon stations, with a large fore-mounted .50 caliber heavy machine gun, a weapon station rear, and a station on port and starboard mounts.

The Australian company parted with Aries Defense, which works with Marine Corps Systems Command and facilitates information and video information transfer from the battlefield between groups.

Given the boat’s stealth characteristics, the company maintains that it can get close to enemy positions and use its mast-mounted Aries sensor package to watch and listen. Alternatively, the boat hosts a small drone that the MMRC boat crew could use to peek at locations over the horizon.