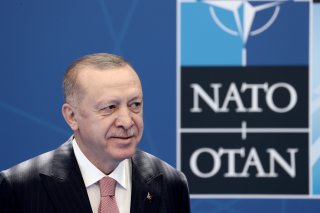 Turkish president Recep Tayyip Erdogan announced on Tuesday that Ankara would block Finland and Sweden from entering NATO, only days after the two nations formally committed to seeking membership in the Western military alliance in the coming months.

In his remarks, Erdogan indicated that his rejection came because of concerns that the two countries continue to host Kurdish militants involved in a separatist conflict against the Turkish government. He added that the two countries did not need to send delegations to convince Turkey to admit them, as his position would not change.

“Neither of these countries have a clear, open attitude towards terrorist organizations,” the Turkish leader said, referring to the Kurdistan Workers’ Party, or PKK, which has many adherents in northern Europe and which reportedly held a meeting in Sweden over the weekend. The PKK is considered a terrorist group by the United States and the European Union, although there is some evidence that Washington directly supported PKK militants during their campaign against ISIS in Syria and Iraq from 2014 onward. Erdogan also charged Stockholm and Helsinki with hosting adherents of Fethullah Gulen, the Pennsylvania-based cleric Erdogan alleges was involved in a 2016 coup attempt.

“How can we trust them?” Erdogan asked, adding that he favored the extradition of Kurdish militants living in the two countries as a precondition for NATO entry.

While Turkey remains an integral member of NATO, Ankara has engaged in a series of increasingly fractious political disputes with some European countries, which have protested the perceived authoritarianism of Erdogan’s government and his policies concerning Syria and Turkey’s Kurdish population.

In 2019, Sweden and Finland both imposed an arms embargo against Turkey due to concerns that their weapons were being used in the country’s intervention in Syria. This move prompted Turkey to issue a pledge to block any NATO applications from countries that have engaged in sanctions against it.

Finland and Sweden both announced their intent to join NATO last week. Leaders in both countries argued that Russia’s invasion of Ukraine had fundamentally altered the balance of power in Europe, requiring them to abandon their longstanding policies of military neutrality. Both also noted that public opinion had shifted from a majority opposed to entry into NATO to a majority in support after the Russian invasion.

“We are leaving one era behind us and entering a new one,” Swedish prime minister Magdalena Andersson told Swedish officials at the Riksdag, Sweden’s parliament, on Monday. She indicated that Sweden’s formal application would be submitted within several days, possibly in sync with Finland’s.

NATO’s membership process dictates that all countries must approve a new member, meaning that any country has a veto over any new addition to the alliance. This veto has been freely exercised in the past; Greece, for instance, blocked the accession of Macedonia for more than a decade until it changed its name to North Macedonia.