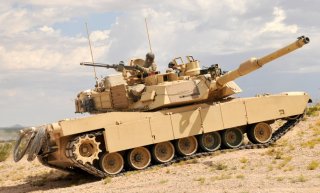 What about future tanks? Certainly, questions about composite materials, heavy armor, and mobility persist as the U.S. Army contemplates its approach to future armored platforms. At the moment, the service seems deeply immersed in a two-pronged approach, meaning it is both sustaining and upgrading its heavily armored platforms such as the Abrams tank while also exploring concepts for lighter-weight, more mobile, and expeditionary armored attack vehicles. There will likely be a place for both, as militaries around the world seek to achieve the optimal balance.

The question is now getting a flurry of new attention following Rheinmetall's release of its new KF51 Panther tank, a new vehicle deliberately named after the famous WWII German Panzers. The new tank, unveiled recently at the well-known Eurosatory military trade show in France, features a host of technologies now generating attention such as a larger 130mm cannon, the ability to launch drones, top-down protection, and 360-degree sensors. The vehicle is reported to be lighter than the seventy-ton Abrams tank at fifty-nine tons and incorporates a crew of three with an autoloader for ammunition.

An interesting write-up in Popular Mechanics details many of the technologies built into the new Panther, which also incorporates a new generation of digital computing, active protection systems, and composite materials. The Popular Mechanics article says the turret is “edgier” and more angled but that the main chassis is similar in configuration to the legacy German Leopard 2 tank.

Naturally, many are likely to compare the modern Panther with the most current variants of the Abrams tank such as the M1A2 SEP v3 and v4. Does the new German Panther represent a paradigm-changing improvement above upgraded tanks such as the Abrams?

The Abrams could be called an “organic” platform, meaning instead of being static in a certain technological position, the platform can continuously be upgraded. Today, the Abrams is almost an entirely new vehicle when compared to the original design which emerged in the 1980s. Like the German Panther, the Abrams does have an autoloader for ammunition and, General Dynamics Land Systems (GDLS) developers say, future upgrades to the Abrams will be engineered with the ability to swap out or exchange its 120mm cannon for a 130mm cannon, making it comparable in ability to the Panther.

“We may keep the Abrams forever,” Mai. Gen. Ross Coffman, director, Next Generation Combat Vehicle, Army Futures Command, told The National Interest about ongoing upgrades to the Abrams. The platform has proven both combat capable and upgradeable.

It is not clear yet that the new German KF51 Panther would out-perform the U.S. Army’s M1A2 SEP v3 or emerging v4 variant. The M1A2 SEP v4 builds upon some of the innovations woven into the v3, including a third-generation forward-looking infrared (FLIR) sensor, upgraded thermal sights, meteorological sensors, and advanced navigational technology such as mapping, sensing, and multi-node networking which have improved the tank’s ability to maneuver in urban environments. Should a bridge or narrow area present restrictions for an Abrams, advanced networking, location data, and mapping might quickly calculate new alternative transport routes. The Abrams v3 is now operational with forward Army units, senior service leaders say.

Public documents and comments from senior U.S. Army weapons developers explain that the next-generation Abrams tank incorporates several paradigm-changing technologies. For example, U.S. Army and General Dynamics Land Systems weapons developers don’t say much about what kind of top-down protection the modern Abrams has for security reasons, yet its technical composition is such that it can integrate cutting-edge active protection systems and launch drones. The technology for a “hemispheric” 360-APS system existed years ago and was explored for Future Combat Systems, so it seems unrealistic that an equivalent would not exist today. Innovations related to APS have been ongoing for many years and the Defense Advanced Research Projects Agency. One past system, called QuickKill developed for the U.S. Army’s FCS, incorporated 360-degree or hemispheric protections. The program did not continue, yet the point is the technical capacity to integrate “surround” intelligence, surveillance, and reconnaissance has been here for years and is of course fundamental to the F-35 stealth fighter’s Distributed Aperture System.

Overall, the kinds of technology used for APS have been on the Abrams for many years, as GDLS developers were able to integrate the Trophy APS system into the Abrams network. This was made possible by common standards and open architecture engineering, a trend that GDLS engineers have continued through the newest v4 Abrams variant. AI-enabled sensing, fire control, and intercept technology are some of the few technical areas that have progressed very quickly.