The U.S. Army’s Future Combat Systems Is the Ghost That Won't Go Away 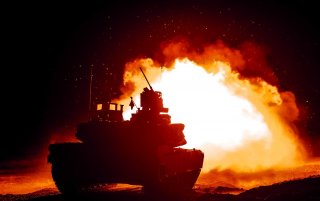 The Army’s Future Combat Systems (FCS) was considered a complete failure, deemed not survivable enough, too lost in changing requirements, and too dependent upon immature yet-to-be-proven technologies.  However, FCS could be likened to a “friendly ghost” that lingers, influences, and infuses current Army modernization with an inspirational spirit.

Former Defense Secretary Robert Gates cancelled the ambitious program in 2009 for not being “survivable” enough, among other things, and the program had many critics despite showing some promise. Ultimately, one could reflect upon the history and influence of FCS with a certain irony, because it was widely discredited, criticized and ultimately cancelled … yet the vision of the program, and some of its progress, is very much alive and powerful today.

First, let’s look at some of the program’s well-known problems. The FCS series of Manned-Ground Vehicles, several of which were fully built, were only 27-tons. The concept was that the so-identified “survivability onion” of advanced sensors, networking and active protection systems will prevent the vehicles from actually taking catastrophic hits.  It brings an interesting parallel to mind … would boxers expect to win a boxing match in part by assuming and planning they will not ever have to take any kind of a hit?

While many of the FCS sensors, such as 360-degree surrounding cameras and advanced networking began to show promise, there were not yet, especially at the time, sufficiently effective lightweight armor composites available to ensure that a vehicle could keep operating if it had to absorb incoming fire from enemy tank rounds, anti-tank guided missiles or other kinds of attacks. There still are not enough new armor composites available to justify any decision to fully replace heavy armor, a circumstance currently fueling debate about the pace at which any kind of replacement for the Abrams tank might emerge. In short, the Manned Ground Vehicles would have been in great danger in the event that the sensor system was jammed, disabled or not able to function properly.

Overall, the concept and technical infrastructure of FCS was centered upon something of great relevance today … the network. Called a “system-of-systems,” the FCS network sought to use advanced sensors, software-programmable radio and advanced SATCOM transport layers to seamlessly integrate an otherwise disparate pool of “nodes” or platforms within a specific system across the force.  The idea, which did at many points show great promise throughout years or FCS development, was to connect small unmanned sensor robots such as an IED-searching Small Unmanned Ground Vehicle or stationary area sensor to both larger platforms and dismounted individual soldiers on the move. This was engineered to function with Joint Tactical Radio Systems software-programmable radios able to function as routers passing IP packets of voice, video and data across the force using high-bandwidth waveforms.  At many points during the maturation and testing of FCS networking, this infrastructure functioned well and showed great promise. Tactically, the network was based upon the prospect that a forward operating small robot, aerial drone or ground-planted motion sensor could find enemy targets and moments of combat relevance, and then instantly transmit crucial data to command and control centers, larger armored platforms and even aircraft.

There were numerous technical components to the FCS network to include A-Kits and B-Kits of hardware and software designed to integrate into existing vehicles and of course infuse a new generation of Manned Ground Vehicles with advanced computing. This included complex computer coding and something called System of Systems Common Operating Environment, a middleware component based upon engineering common, open standards of IP protocol to enable successful interoperability and the networking of information across the force.

Now, stepping back for a moment … let’s look at what this vision is. It could be described as a technical attempt to architect a “kill web” of sensors and shooters across the force in real time to massively accelerate and expedite the combat attack process, therefore enabling an attacking force to use information itself as the key weapon with which to get inside the enemy’s decision cycle and destroy an opponent before getting hit.  Sounds like Project Convergence 2020 at Yuma Proving Grounds, Ariz., no? ...., a massive live fire exercise wherein Army weapons developers showed that disconnected manned and unmanned systems such as drones, helicopters and ground combat vehicles can find, track, transmit and destroy enemy targets across platforms at great distances in a matter of seconds, truncating sensor to shooter time from 20-mins to 20-seconds. Project convergence connected satellites, small forward-sensing mini-drones, helicopters, larger drones and ground attack vehicles to one another in real time, using advanced AI-enabled computer systems to match sensor-to-shooter and "take out" targets immediately. It was, by any estimation, a huge breakthrough, and something which, arguably, executes and brings to live a decades-long Army ambition to prepare for future warfare.

Does this mean that, at least in concept, the initial FCS vision has, to a certain extent, become reality? Seems that way -- thus the ever lingering friendly ghost of FCS may be here to stay.