Will Germany Choose America's F-15EX as Its New Fighter? 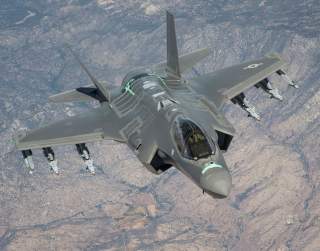 Key point: Berlin hasn't made up its mind what kind of new plane it needs.

The plane will replace the Luftwaffe’s fleet of 93 Panavia Tornado fighter-bombers and complement the service’s roughly 140 Eurofighter Typhoons. For the longer term, Germany is working with France to develop a next-generation warplane under the Future Combat Air System program.

It’s unclear how many new fighters Berlin wants and therefore exactly how much the purchase could cost. But the price is likely to be in the billions of dollars.

Officially, just two types are in the running for the German acquisition -- the Boeing F/A-18E/F Super Hornet and the Typhoon. Berlin in early 2019 dropped the Lockheed Martin F-35 stealth fighter from the competition.

But there’s a problem. The German air force as part of its commitment to NATO must contribute tactical fighters to the alliance’s plans for “tactical” nuclear warfare. Under the NATO scheme, fighters from across the alliance would drop American nuclear bombs.

The Tornado is compatible with nukes but neither the F/A-18E/F nor the Typhoon can carry atomic weapons. “Annegret Kramp-Karrenbauer asked Washington to spell out what it will take to get those aircraft certified,” Scramble magazine reported. “This certification process will take years and creates a problem as the costs of maintaining the 93-strong fleet of beautiful Tornados is rapidly rising.”

The nuclear-compatibility problem could create an opening for the F-35, Scramble pointed out. “We wouldn't be surprised if eventually, a low number of F-35s for the Luftwaffe is becoming reality again. … A purchase of the F-35A helps in building up experience with fight-generation [stealth fighters] and it makes a more easy certification process (with the F-35) for the NATO obligations.”

If Germany does re-admit the F-35 to its fighter competition, it wouldn’t be the first time the American stealth jet was subject to back-and-forth politics.

In 2010, Canada's Conservative Party government announced plans to acquire 65 new F-35s by 2020. But the government never fairly compared the F-35 to rival fighter types such as the Typhoon, the Auditor General of Canada concluded in a 2018 report.

But the F-35 is still a leading contender in the contest against the Saab Gripen, the Typhoon and the F/A-18E/F. Canada recently even tweaked the competition rules apparently to favor the F-35.

Leaving aside the possibility of a small acquisition of F-35s for the nuclear mission, the Typhoon is still the German air force’s preferred plane to replace the Tornado, Scramble reported.

There are benefits and detriments to a mixed buy, Defense News explained. “Ordering both the Typhoon and an American aircraft would make it easier to continue carrying out the NATO nuclear mission, while also lending support to the European industrial base. However, it could complicate logistics, adding more expense and forcing the German air force to maintain two supply chains.”

The editors at Scramble actually favor a type that’s no longer in the running. “In our eyes the F-15E would be a splendid choice for the aviation community.” The Boeing-made F-15 is compatible with nuclear weapons. The U.S. Air Force plans to begin buying a new and improved F-15E variant, the F-15EX, starting in 2020.