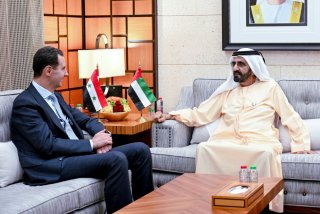 Syrian president Bashar al-Assad has only managed to remain in power because of support from Russia and Iran, his closest allies.  However, while both states can marshal their military power on his behalf, neither can support him economically. Tehran is still negotiating a renewed nuclear deal with Washington to have its own sanctions removed, while Russia, Syria’s oldest ally, is currently bogged down in its invasion of Ukraine and facing its own wave of global condemnation and sweeping economic sanctions. This leaves Assad in a predicament: he needs new partners with available financial resources to implement a robust national reconstruction strategy and turn his economy around.

After ten years of war and international sanctions, Syria’s economy is crippled, and ordinary Syrians are suffering. As the war progressed, the U.S. government imposed a series of sanctions to cripple the regime’s financial lifeline, including via the Caesar Syria Civilian Protection Act of 2019. These sanctions were ostensibly passed to punish Damascus for its violence against its people and to prevent certain economic activities with the regime. No doubt, the Assad regime has countless innocent lives on its hands, but so do the governments who supported various opposition groups fighting the regime. Since the conflict began, the United States and its regional allies, including Qatar, Saudi Arabia, and Turkey, have all contributed to the war in Syria by arming and training rebel groups opposed to Assad.

Indeed, in 2016, Qatar’s foreign minister, Sheikh Mohammad bin Abdulrahman al-Thani, said his country will continue to equip Syrian rebels with arms regardless of what the US. position is on the multinational effort. Yet five years later, in a meeting held in Doha on March 10, 2022, with his Turkish and Russian counterparts, al-Thani said the three countries discussed strategies to deliver humanitarian aid across Syria and to prioritize Covid-19 vaccine relief. Further, all three concurred the only solution to the fighting was a political settlement in line with the United Nations resolutions. Al-Thani also expressed his country’s reasons for not reestablishing ties with Syria, reiterating that the conflict’s original problems persist, including Assad’s unwillingness to take steps that will ensure a permanent peace.

But this has not prevented other regional actors from making their own efforts to rebuild diplomatic relations with Syria. For example, although Syria was formally suspended from the Arab League in November 2011 for its crackdown on the Syrian people, much has changed in the last decade. In fact, there has been a convergence of interests between the Syrian people, who need regional and international support to rebuild their country, and the Arab Gulf countries, which have enormous wealth and interests in Syria. This is increasing the chances of normalization between Syria and the Arabs.

In a recent surprise visit to the United Arab Emirates on March 15, 2022, Assad made his first official trip to an Arab country since the war began. Upon reaching Abu Dhabi, Assad was greeted by Sheikh Mohammed bin Rashid Al Maktoum and other Emirati leaders. The trip follows another notable event last year, when Saudi Arabia sent an intelligence delegation led by its General Intelligence Directorate to Damascus with the intention of initiating a dialogue with Assad’s government on issues where both countries can cooperate. Then, in May 2021, Syria dispatched its own delegation of ministers to Riyadh, the first time this had happened in a decade. It was led by Minister of Tourism Muhammad Rami Martini, who participated in meetings with the Saudi Ministry of Tourism and the World Tourism Organization. Consequently, the Saudi kingdom’s attitude is one of acceptance: times have changed, and the Saudis can better advance their interests by embracing, rather than fighting, Assad.

However, Washington does not share this view and has condemned its allies for engaging with Assad. On March 18, State Department spokesperson Ned Price reasserted the U.S. position: “We urge states considering engagement with the Assad regime to weigh carefully the horrific atrocities visited by the regime on the Syrians over the last decade, as well as the regime’s continuing efforts to deny much of the country access to humanitarian aid and security.”

Yet despite the criticism, the Arab world remains defiant. America’s traditional allies and Assad’s former opponents are no longer under the illusion that the Syrian regime will fall; it has become clear that dialogue is the best way to pursue their regional interests.