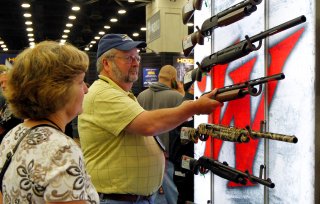 Winchester is currently the largest manufacturer of small-caliber ammunition for the U.S. military, and this month was awarded an additional $13 million contract for the development of a manufacturing process for the 7.62-millimeter NATO cartridge. Work will be performed at the Lake City Army Ammunition Plant (LCAAP), which is located in Independence, Missouri. It is the single largest producer of small arms ammunition for the United States Armed Forces, and it is also the only contractor-operated and government-owned small-caliber ammunition production facility in the county.

“Winchester is extremely proud to have been awarded this military ammunition manufacturing development project,” Brett Flaugher, president of Winchester Ammunition said in a statement. “Our entire Lake City team is honored and wholly committed to supporting the U.S. Warfighter.”

As part of the contract, Winchester Ammunition will develop a new manufacturing process to help improve efficiency at the LCAAP. The plant has been in continuous operation since 1941, except for a short period after the end of World War II.

Winchester Ammunition manufactures every caliber of small arms cartridges used by the military, including 5.56-millimeter, 7.62-millimeter, .50-caliber and 20-millimeter loads. Additionally, it is one of a very small number of domestic facilities that can produce primers for those cartridges. It also currently serves as a national and regional test center for ammunition performance and weapons firing.

It is expected that LCAAP will also produce the new 6.8-millimeter cartridges for the United States, which is currently in the process of selecting a new infantry weapon to replace both the M4 Carbine and M249 light machine gun.

In 2019, Olin Corporation’s ammunition division, Olin Winchester, had been selected by the Army to operate and manage LCAAP, which is located on 3,935 acres, under an $8 billion contract. Following a one-year transition period, Winchester assumed full operational control last year on Oct. 1, 2020.

The contract had an initial term of seven years and could be extended by the U.S. Army for up to three additional years. Winchester had previously held the contract to manage and operate LCAAP from 1985 to 2001. From 2001 until 2020, Alliant Technosystems ran the facilities.

“This is an important milestone for Winchester, our first shipment to the U.S. government after just assuming management and operational control of Lake City,” Flaughersaid said in 2019 when Winchester was awarded the $8 billion contract to manage and operate LCAAP. “Our ability to execute through this transition process and make our first delivery within two weeks is a testament to our dedicated work force.”

Thanks in part to its management of Lake City, Winchester’s sales in the third quarter of 2021 were up 94 percent over Q3 of 2020.

This new contract is also just the latest one the historic ammunition maker–which is now in its 155th year of operation and 91st under the Olin corporate umbrella–was awarded this year. The company was awarded a $5 million, five-year term contract from the Department of Justice earlier this year to supply .308 Win/7.62x51-millimeter NATO small arms ammunition for the FBI’s sniper program.