Without This Critical Resource, America Will Never Win Another War 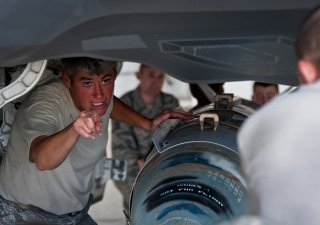 Within ten to twenty years, a number of disruptive, paradigm-changing technological breakthroughs in cybersecurity and artificial intelligence are set to revolutionize the way algorithms discern, categorize, and analyze information. But there is a problem: many of the basic researchers exploring these concepts today at key places such as the Air Force Research Laboratory are likely to retire in the next  years. What happens if the most gifted scientists and innovators shaping the next-generation of computer technologies and weapons systems leave the workforce?

The Air Force is trying to get ahead of this challenge by generating large numbers of outreach programs for talented young people in the areas of Science, Technology, Engineering and Mathematics, often referred to as STEM.

The U.S. military understands that it needs a new generation of experts in order to keep pace with its current progress on technological breakthroughs and advances in emerging technologies. For example, to remain a cutting-edge innovator in cyber technologies, the Air Force needs to develop a talent pool of people who are able to keep pace with the speed at which technology is evolving. In an interview with The National Interest, Air Force Research Laboratory (AFRL) commander Maj. Gen. Heather Pringle described how the AFRL hosts thousands of outreach events to inspire, teach, and identity talented young technologists. When it comes to new recruits, the future is bright, Pringle said.

“Recently, I was in New Mexico for the National Junior science and humanities symposium, handing out awards to the best and brightest high school students in this nation. And I have to tell you, the talent out there is eye watering. And I was so impressed by these young students doing very-high-level Science and Technology College worthy research. I think the world is in good hands with these junior scientists and engineers,” Pringle explained.

These kinds of initiatives are also being pursued by the Army, Navy, and Joint-Force community, which recognizes the pressing, if not urgent, need to sustain and improve upon research, innovation, and the ability to upgrade weapons systems.

For instance, the The National Security Innovation Network (NSIN), is specifically designed to accomplish this objective by hosting a series of initiatives to support, inspire, and fast-track innovation.

“To accomplish this mission, NSIN collaborates with major universities and the venture community to develop solutions that drive national security innovation. Our work focuses on three distinct areas that form a pipeline of activities and solutions that accelerate the pace of defense innovation,” Scott Augenbaugh, strategic gngagements director at NSIN, told The National Interest in a written statement.

One such NSIN program is called the X-Force Fellowship, an initiative which places 139 undergraduate and graduate students from sixty-six universities with operational military commands. This helps expose talented young professionals to military culture and innovations.