The World Is Ending. Marc Maron Saw It Coming (Now on Netflix). 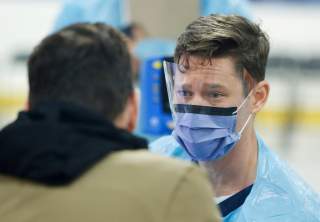 Studies have found that pessimists live longer, make more money and adapt better to a changing world than optimists do.

Pessimists, in other words, might actually be realists. And if that’s the case, few people are more realist in their outlook than comedian and actor Marc Maron.

After all, Maron a couple of years ago began working up the material for his new stand-up special End Times Fun, which dropped on Netflix in early March 2020. The theme of the special is the end of the world. Maron seemed to expect, if not actually predict, that something horrible would happen to the human race.

He was right. In late 2019, the novel-coronavirus leaped from an illicit wildlife market in Wuhan, China. As Maron’s special debuted, the virus had infected around 100,000 people all over the world and killed 3,000 of them. And it’s only gotten worse since then, revealing a profound lack of preparation on the part of many governments.

Now there are travel-bans. Public events are becoming rare. Stocks have tanked. Entire industries are on the verge of collapse. The virus could kill hundreds of thousands of people, if not millions, and drag the world into recession.

Amid the crisis, we at least can laugh along with Maron at our own narcissism, incompetence and self-inflicted doom. After all, we’re lazy and selfish and stupid and to a great extent we did this to ourselves.

Maron saw the signs. The Joker and GLOW actor “has been bracing for an apocalypse his entire career,” Fast Company noted. “Now that the locusts are finally descending, it’s his time to shine.”

In End Times Fun, Maron tries to explain how we screwed ourselves. The apocalypse he describes is more ecological than pandemic, but in any event it’s still mostly our fault.

“We knew it would happen,” he says. “On a deeper level, the reason we’re not more upset about the world ending is all of us know in our hearts we really did our best. … I mean, we brought our own bags to the supermarket.”

He pauses, scowls. “And really that’s it.”

“Maybe this no-straw thing -- maybe that’ll keep the polar bears from drowning,” he adds. “Sometimes the answer to the equation is between your mouth and your soda.”

“If he was doing another job, he’d be the same a**hole,” Maron says of Trump. “If he was working on a car lot and you went onto the lot to buy a new car and he came walking toward you, you'd be like, innately, no not that guy. I don’t feel comfortable about that guy.”

But Maron’s withering wit quickly shifts aim back at the comedian’s fellow lefties.

“A lot of people ask, ‘How did this happen?’” Maron says of Trump’s 2016 election. “I had to ask myself that question and now I’ll ask you. During the Obama years, were you pretty politically active? Yeah, exactly. If you ask most people what they did during the Obama years, it’d be like, well, ‘I did a lot of work on myself.’”

FILE PHOTO: A medical worker assesses someone portraying the role of a patient as hospital staff prepare to receive people for coronavirus screening at a temporary assessment center at the Brewer hockey arena in Ottawa, Ontario, Canada March 13, 2020. REUTERS/Patrick Doyle/File Photo