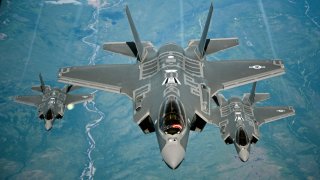 As it charts its acquisition plans into the coming decades, the U.S. Air Force races to contain the costs of the F-35 stealth fighter jet program.

Budget talking points obtained by Air Force Magazine reportedly show that the Air Force will propose a ten percent cut to its projected F-35 purchases. The talking points, prepared for Chief of Staff General Charles Q. Brown, Jr. show a tapered acquisition pattern from fiscal year 2023 to 2026, with the effect of reducing the overall purchase volume from 240 to 220 units. Air Force Magazine notes that it is not yet clear whether or not Brown approved the new plan. “The information outlined in the talking points regarding future Air Force fighter force structure is pre-decisional,”  Brigadier General Patrick Ryder, Air Force public affairs chief, said.

The document outlined two major issues: mounting sustainment costs and the imminence of a Block 4 revision.

The talking points argued that not only has the F-35 failed to reach its operating cost of $4.1 million per unit per year, but Air Force officials are increasingly skeptical that this goal is attainable. Far from this $4.1 million projection, the talking points suggest that the F-35 will reach per model annual sustainment costs of $7.8 million in 2036. “This is an unaffordable sustainability model if the F-35 were to become the majority of [the Air Force’s] fighter fleet. The Air Force needs the F-35’s advanced capabilities, [but] in affordable capacity.” The talking points echo concerns, raised publicly by Brown earlier this year, that the F-35 has become too elite to serve as a lightweight, affordable, “fourth-and-a half/fifth-gen minus” that is capable of widely phasing out USAF’s hundreds of aging F-16 fighters. “You don’t drive your Ferrari to work every day, you only drive it on Sundays,” said Brown. “This is our ‘high end’ [fighter], we want to make sure we don’t use it all for the low-end fight … We don’t want to burn up capability now and wish we had it later.” The alleged document tracks with Brown’s assessment, characterizing the F-35 as a high-end weapon to counter sophisticated threats:  “whether the Air Force is able to afford to replace the majority of the fighter fleet with F-35s is a decision point that is still a few years off. In the near term, we must concentrate on achieving the F-35 capability needed for advanced threats (high-end fight).”

The Air Force acknowledged that the plane's per-unit cost has dropped significantly, and is projected to fall below the $78 million mark in 2022, but argued that sustainment outlays “will be the overall cost driver.” Here, too, there have been signs of progress, with the plane’s cost per flying hour dropping around ten percent over the past year, but USAF insists that more work needs to be done if the program is to proceed on a financially sound foundation. The Air Force talking points suggested shifting focus to ensuring that the Block 4 upgrades are “affordably realized.” The Block 4 package will bring a major software revision, boosting the processing power of the F-35’s computers. This will allow the plane’s APG-81 Actively Electronically Scanned Array (AESA) to operate more efficiently, and will further enhance the F-35’s sensor fusion capabilities. The revision is likewise set to upgrade the fighter’s weapons loadout with advanced new targeting and tracking technologies.

The purchasing reduction reportedly being proposed by the Air Force amounts to a shot across the bow for the future of the F-35, threatening the program with sharp cuts if sustainment costs cannot be brought under control in coming years.