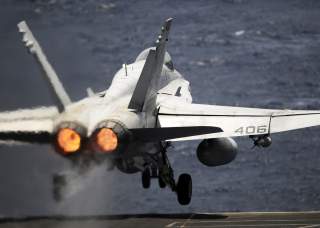 Forty years ago this New Year’s Day, one of the most historic moments in the history of U.S. diplomacy occurred: the United States and the People’s Republic of China ended their thirty-year estrangement and established formal diplomatic relations with one another. The exchange of ambassadors and opening up of embassies in Washington and Beijing was one of the crowning achievements of Jimmy Carter’s presidency, the end result of diplomatic spadework sparked by President Richard Nixon and Secretary of State Henry Kissinger seven years earlier.

While China’s ambassador to the United States was celebrating the forty-year anniversary with conciliatory words in the pages of USA Today and President Xi Jinping was writing to President Donald Trump in the hope of jumpstarting a more productive relationship in 2019, a Chinese admiral was pontificating about sinking American aircraft carriers in the open ocean. Speaking at a military conference in the Chinese city of Shenzhen on December 20, Rear Adm. Lou Yuan boldly asserted that China’s anti-ship missiles could sink a U.S. carrier as easy as a snake could swallow a mouse. Whereas the U.S. and Chinese governments generally use military-to-military talks and diplomatic channels to avoid confrontation in one of the most critical waterways on the planet, Admiral Lou’s solution to the territorial dispute is nothing short of the exertion of full Chinese military hegemony in the region.

“What the United States fears the most is taking casualties,” Lou lectured his audience. “We’ll see how frightened America is.”

How seriously should we take these comments? And are they in any way indicative of thoughts permeating in the People’s Liberation Army hierarchy? The answer, fortunately, is probably not.

First, consider the source. Adm. Luo Yuan is an academic and has no commanding position in the Chinese armed forces, so he is free to spout off at the mouth to his heart’s content (as long as he doesn’t make China sound week). And spit off he has; the man has a history of histrionics, including an instance last December when he stated that Beijing should invade Taiwan if the U.S. Navy did so much as dock its ships in a Taiwanese port.

Second, there is no indication whatsoever that Beijing would be brazen or stupid enough to do anything the rear admiral outlined. Sure, Chinese vessels have sailed dangerously close to U.S. ships and have strenuously objected to U.S. freedom-of-navigation operations in the South Sea and Taiwan Strait, but that has been the extent of Beijing’s response. It’s that way for a reason: deliberately sinking any U.S. vessel, let alone an aircraft carrier, would elicit such extreme retaliation from Washington that the so-called U.S.-China cold war we are now talking about would look like a cake walk in comparison to the hell that would be unleashed in a hot conflict. The Chinese may seek dominance in the South China Sea, but not at any cost.

It should also be noted that Beijing is heavily dependent on the South China Sea’s corridors for its own economic growth. The reason China’s economy has boasted such impressive double-digit growth for decades at a time (Chinese economic growth in 2018, however, slowed to its weakest since 1990) is that the country is an export machine. And it uses the South China Sea to push goods out and to bring oil in. As Retired Col. Douglas Macgregor, a decorated combat veteran and strategic planner, told me in an email, “the Chinese have never stopped a commercial vessel. Why would they? They depend on the SCS for the delivery of oil and gas. It’s a lifeline!”

In other words, for China to obstruct traffic in the South China Sea would be about as smart as a small business jeopardizing a relationship with its main supplier. It just doesn’t make sense.

Rest easy. Washington and Beijing aren’t going to war in the sea anytime soon. Both capitals have an incentive to prevent it from happening, and no ridiculous comment from an armchair general with a record of braggadocio is going to upend the status-quo.