Would the U.S. Navy Lose a War to Russia or China? 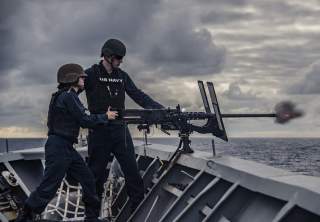 The U.S. Navy has concentrated too much of its combat power in big, expensive ships that are too few in number to win in battle against Chinese or Russian forces. That’s the stark warning in a new report from the Washington, D.C. Center for Strategic and Budgetary Assessments.

“The U.S. Navy has been slow to address the changing threat environment,” Bryan Clark and Timothy Walton wrote in the December 2019 report. ”As a result, today’s surface force lacks the size, resilience, and offensive capacity to effectively support the U.S. National Defense Strategy’s approach of deterring aggression by degrading, delaying, or defeating enemy attacks.”

“The surface fleet is weighted toward large combatants that are too expensive and manpower-intensive to achieve the numbers needed for distributed operations,” Clark and Walton continued. “They also rely on sensors that will likely be unavailable or create unacceptable vulnerabilities during combat against a great power like China.”

“Perhaps of most concern is the fact that the current fleet is fiscally unsustainable due to the escalating costs to crew, operate and maintain today’s highly integrated manned surface combatants,” the experts concluded.

The Navy as part of its ambition to expand from 290 front-line ships to 350 continues to build large numbers of Arleigh Burke-class guided-missile destroyers and by the mid-2020s could possess more than 80 of the nearly 10,000-ton-displacement vessels. Each costs around $2 billion.

The Burkes alongside 22 aging Ticonderoga-class cruisers and a new class of 20 small guided-missile frigates form the core of the Navy’s planned future fleet. Each ship packs scores of vertical-launch cells for anti-air, land-attack and anti-ship missiles as well as powerful radars.

But switching on those radars is like shining a flashlight in a dark room and “would likely betray the ship’s position to a reasonably sophisticated adversary,” according to Defense News’ David Larter. Chinese forces could zero in on the radiating warship and sink or disable each. With so much of the U.S. Navy’s combat power concentrated in so few ships, the Americans can’t afford to lose more than a few vessels before they must cede the seas to the enemy.

U.S. Navy leaders are aware of the problem and have a plan to remedy it. The fleet has begun developing small, affordable robotic vessels. Carrying sensors and a few missile cells, the unmanned surface vessels could function as pickets and arsenals, both scouting ahead of the manned warships and contributing their own missiles to the wider fleet’s attacks.

Robotic pickets could radiate while manned destroyers keep their radars switched off. That solution might address the problem of the flashlight in the dark room, but it also creates a new problem of its own.

Namely, the USVs during wartime could be vulnerable to irregular forces such as China’s maritime militia. The Chinese government employs hundreds of mariners who travel in fishing-style vessels in order to harass enemy ships or occupy disputed waters. According to Clark and Walton, Beijing could deploy these maritime militiamen to track down, board and disable American USVs.

The experts in their report proposed a fix. The Navy should cut back on destroyer-production and shift the savings into developing optionally-manned armed corvettes -- “DDCs,” they call them -- that can accommodate small crews or sail autonomously.

“By having small crews, DDCs could contribute to peacetime training, engagement, maritime security and deterrence,” Clark and Walton wrote. “DDCs would also have a lower risk compared to unmanned vessels of being captured or herded out of operating areas by adversary forces like China’s People’s Maritime Militia.”

There is some evidence the Navy at least is considering radically new flight designs such as the one Clark and Walton proposed. The fleet in late 2019 communicated to the White House that it wants to curtail its destroyer program and begin counting unmanned vessels as front-line warships.