Yes, North Korea Does Have a Nuclear Missile Submarine 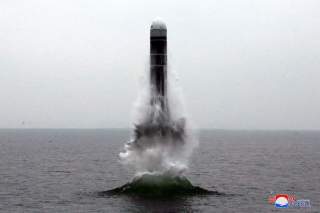 Key point: Pyongyang's Gorae-class Sinpo-B submarine has been modified to launch nuclear missiles and North Korea has been testing it.

North Korea’s Kim dynasty has long practiced an unsubtle form of political signaling which can be summed up: when things aren’t going its way, launch some missiles.

And as U.S. troops prepared to embark on their its first major military exercise with South Korea after a long hiatus in August 2019, on July 22 Pyongyang released photos of Kim Jong Un in gray suit visiting a dry dock to inspect what analysts have concluded is an old Romeo-class submarine modified to launch ballistic missiles through its sail (conning tower).

However, the appearance of the nuclear-armed Romeo puts a new twist on previous intelligence reports. Was an evolved Gorae-class boat canceled—or does North Korea already have a third, presumably more modern, ballistic-missile submarine waiting in the wings?

North Korea’s nuclear-armed Romeo-class submarine is the product of a submarine-design lineage that traces its way back to three other countries, two of which technically no longer exist.

Following its defeat of Nazi Germany in World War II, the Soviet Union acquired then-advanced Type XXI diesel-electric submarines—and used them to model its own early-Cold War attack boats, starting with the Zulu and Whiskey-class.

The Romeo-class, or Project 633, amounted to the last and most advanced in the lineage of Soviet diesel-electric submarines evolved from German U-Boats. The sub’s two diesel engines each turn a screw, propelling the sub to a maximum speed of 13 knots while submerged. The double-hulled Romeos had six bow-mounted and two-stern tubes for launching unguided 533-millimeter torpedoes.

The Soviet Union built only twenty Romeos between 1958–1961, but transferred the technology to China began building its own model called the Type 033 (which also uses the same “Romeo” NATO codename.) The Type 033s differed from the Project 633s in incorporating an improved Chinese battery and featuring stronger refrigeration for operations in the warmer waters in southeast Asia. (The crews of Soviet Foxtrot-class submarines suffered horribly due to inadequate air conditioning when deployed to the Caribbean during the Cuban Missile Crisis.)  Between 1962 and 1984 Chinese shipyards churned out over one hundred Type 033s of various models, many of which were exported to Algeria, Bulgaria, Egypt and Syria.

In 1973, China sold seven Type 033s to North Korea.  Around a dozen more were domestically manufactured in North Korea.  Today, Pyongyang is thought possess twenty to twenty-two Type 033s, though likely not all are in operational condition. The 76-meter long Romeos constitute the “heavy” side of the roughly seventy submarines in the North Korean Navy—most of which are smaller, short-range mini-submarines.

Though possessing comparatively greater range, speed and armament than the mini-submarines, the Romeos are still very noisy compared to contemporary submarines. Some Chinese sources imply the standard Type 033 emitted 160 decibels of noise, compared to an estimated 95-110 decibels for modern nuclear-powered submarines.

The Romeos further are limited by a need to snorkel or surface every few days to run their two 2,000-horsepower air-breathing diesel engines—exposing their hulls or protruding snorkels to radar detection. Realistically, the Romeos would want to stick close to the very shallow and noisy waters of the Korean Peninsula to mask their acoustic signature and slightly level the playing field against the far more advanced submarines operated by Japan, South Korea and the United States.

North Korea’s apparent conversion of one of the rusting Romeos into a “strategic” (ie, nuclear-armed) submarine is a creative repurposing of an aging asset. As its challenging to fit the vertical launch tubes of ballistic missiles in a submarine’s cylindrical hull, the Romeo’s conning tower has instead been stretched and slightly widened to accommodate two or three huge ballistic-missile launch tubes.

You can see possible provisional diagrams of the modified Foxtrot by submarine analyst HI Sutton here, who also commented to Popular Mechanics that the missile tubes apparent location running through a battery compartment may imply diminished underwater endurance.

Is there a third North Korean SSB in the works?

In 2016, North Korea’s 1,650-ton Gorae-class submarine to test-fire its first submarine-launched ballistic missile, the solid fuel Pukkuksong-1 (“Polaris”). The comparatively modern-looking Gorae is effectively only a demonstrator, with only one launch tube.

In 2017, satellite photos revealed what appeared to be construction of a new 2,000-ton successor of the Gorae, dubbed the Sinpo-C. North Korea also pointedly shared an image showing development work on a Pukkuksong-3 SLBM—presumably with a longer range to enable strikes on more distant U.S. naval bases.

The modification of a Romeo doesn’t seem to correspond with that earlier imagery that appeared to depict the unassembled components of a brand-new vessel. Does this mean that the Sinpo-C has been canceled in favor of the less expensive Romeo conversion, or does it remain under construction in parallel? Or were the 2017 photos simply misinterpreted?

Either way, if North Korea wants to establish a better than sporadic sea-based nuclear deterrence, it will surely seek to build or convert additional SSBs so that at least one or two can be deployed at sea at any time.  The sea-based nukes would threaten a deadly nuclear retaliatory attack (or “second strike”), even if Washington or Seoul were convinced they could otherwise knock out North Korea’s land-based nuclear weapons with a first strike. This will force the U.S. Navy and its regional allies to devote resources to tracking the position of North Korean SSBs in the treacherous shallows of the Sea of Japan.

Ankit Panda of The Diplomat also points out that North Korea lacks the sophisticated communication capabilities used by other ballistic missile submarine operators to maintain command-and-control links with submerged nuclear-armed submarines. Thus the methods by which North Korean boomers would receive authorization to launch a nuclear strike remain worrisomely obscure.

Pyongyang’s calculated release of the photos of the nuclear-armed Romeo makes two things clear, however.

First, Kim Jong Un is increasingly disappointed and impatient with stalled negotiations with Washington—and wants to remind the world of his still-evolving nuclear-weapon capabilities.

Second, it confirms that North Korea is committed to deploying sea-based nuclear missiles as an “insurance policy” against attempted regime change—and that likely would have remained a reality even had Washington been willing to satisfy more of Pyongyang’s demands.

Sébastien Roblin holds a master’s degree in conflict resolution from Georgetown University and served as a university instructor for the Peace Corps in China. He has also worked in education, editing, and refugee resettlement in France and the United States. He currently writes on security and military history for War Is Boring. This first appeared in July 2019.