You Can Buy a Tank (Well, Not in the United States) 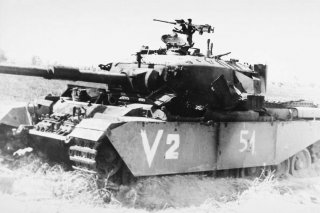 History buffs and vehicle collectors should take notice—a trio of British Centurion tanks is currently up for sale, and while the price is a bit more than a luxury automobile, can you really put a price on the history that comes with these machines? The classic ex-military tanks were reported to have been used by the Australian military during the Vietnam War.

The vintage armored vehicles are currently being offered for sale by Tank Ride, a Queensland company that allows people to drive tanks for fun rather than into actual combat. The Centurions are expected to fetch between $80,000 and $120,000 each and that’s before any international transport costs. One of the three is a “mid-restored” Mark 3 gun tank, while the other two are Mark 5 gun tanks. One of those two was restored after its gun turret took damage in combat while in Southeast Asia.

Developed during World War II, the Centurion arrived too late to make any real impact on the outcome of the war, yet had it arrived earlier it certainly could have stood up to the heavily armored German Panthers and Tigers. The Centurion has been considered one of the best overall tanks of the early Cold War. It saw use in a number of conflicts including in the Korean War, the Suez Crisis, the Six-Day War, Vietnam and most recently in the Syrian Civil War. A few of the aging tanks' hulls have been converted to armored personnel carriers and are still in service with the Israel Defense Forces and the Jordanian Army.

A total of 4,423 were produced in Great Britain, and while Centurion tanks do regularly come up for sale those being offered in Australia reportedly are operational and “drive well,” said Tim Woods, owner and operator of Tank Ride.

“All vehicles are stored undercover and have been loved and appreciated,” Woods told the Daily Mail. He added that he is selling the massive war machines to lighten his workload but also to make room for new tanks.

He personally maintains a large collection of tanks but would like to use the proceeds from the sale to purchase different vehicles that his clientele can appreciate. Likewise, he’ll be keeping three additional Centurions in his inventory and Tank Ride will continue to operate.

Each Centurion weighs around fifty-two tonnes and has a top speed of thirty-five kilometers. In addition to the upfront cost of the tanks, would-be buyers should note that the behemoths guzzle around two liters of fuel every one hundred meters, so Woods estimated that a trip to nearby Brisbane could cost upwards of $2,500. Just filling up the gas tank costs around $800, and with fuel prices on the rise, some would-be owners might rather have them as static displays.

Tanks are legal to drive on private property in Australia and the same rules apply in the United States. However, in both countries, it is required that the tank’s weapons be deactivated. In other words, these are tanks that can be driven, just not driven into battle.