You Missed This: There Is a Strange Air War Raging Over Libya 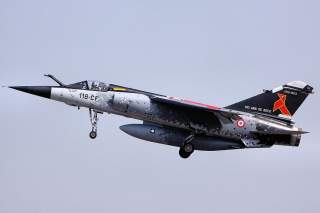 On April 14, a lone MiG-21 jet fighter jet soared low over the metropolis of Tripoli. The iconic Soviet-built warbird was famed for battling American-built jets during the Cold War. But this particular MiG was being flown by Lt. Commander Jamal Ben Amar on behalf of the Libyan National Army, one of the two principal factions warring for control of the North African state following the overthrow and killing of its long-reigning dictator Muammar el-Qaddafi in 2011.

As Jamal flew over the Mediterranean port, fighters of the opposing Government of National Accord (GNA) opened fire with Soviet heavy machine guns. The bulky truck-mounted weapons kicked up clouds of dust as they rattled out a hail of. 50 and .57 caliber machine gun rounds.

Near simultaneously, two teams with man-portable anti-aircraft missiles open fire as the jet rapidly shrunk into a speck in the distance. The missiles leapt up into the sky at twice the speed of sound, their vapor trails crisscrossing. One clearly failed to acquire its targets. The other heat-seeking weapon homed directly in the wake of the MiG-21’s hot jet exhaust.

You can see the action swiftly unfold in this recording.

As the fighters excitedly chanted Allahu Akbar, the second missile—by some accounts a Chinese-built FN-6—apparently detonated close to its targets. Though not visible on camera, the kill was later confirmed by photos of the wreckage on the ground, which could be matched to photos of one of the handful of MiG-21s being operated by the LNA at Al Watiyah. The LNA eventually admitted the loss. Amar was photographed parachuting down. He was later rescued by an LNA Hind helicopter.

The stage for this drama was set ten days earlier on April 4, when General Khalifa Haftar launched a large part of the 25,000 fighters in the LNA faction on a surprise assault on the port city of Tripoli, the seat of the internationally-recognized Government of National Accord. The LNA’s base of power is in eastern Libya, with a government seated in Tobruk.

Prior to Haftar’s attack, there had been hopes of a new peace accord. Currently, Haftar’s forces control 80 percent of Libya, but the GNA stills holds onto the coastal cities of Tripoli and Misrata. Though the GNA musters 5,000 militia in Tripoli, its combat power principally comes from 18,000 fighters of the Islamist Libya Dawn faction from the neighboring city of Misrata.

The LNA has sought to portray the GNA, which also has ties to the Muslim Brotherhood, as promoting terrorism. However, the LNA’s ranks also include many radical Salafist fighters, or “Madkhalists,” known for their theocratic-authoritarian views and inclination to crackdown on such heresies as celebration of “Earth Day.”

The ever-shifting loyalties of the Libyan factions frustrates any attempt to identify “good guys” and “bad guys”—particularly after an enclave of brutal ISIS fighters dug into Sirte was eradicated in 2016 with the help of nearly 500 U.S. air strikes.

In the absence of even a dysfunctional unified government, atrocities such as slave markets in which ethnically African peoples are traded and sold, and episodes of mass sexual violence and political killings by local militias abound. Huge stores of arms left over from the heavily militarized Qaddafi regime have flowed across the border to fuel insurgencies in Malia, Niger and Burkina Faso.

The rival factions have attracted numerous international backers. The United Arab Emirates, France, Russia, Saudi Arabia and Egypt support the LNA—the last because Cairo’s current military government is cracking down on the Muslim Brotherhood, a branch of which it overthrew from power in 2013. Meanwhile, Qatar and Turkey are supporting the GNA, which is also officially recognized (but not militarily supported by) Rome and Washington.

The MiG-21 lost on April 14 was apparently transferred from the Egyptian Air Force. And the missile that shot it down was most likely bought from China by Qatar, then smuggled to Libya via Sudan.

International aid to the LNA and GNA has particularly manifested in the form of training, maintenance support and even furnishing mercenary pilots. Egyptian warplanes have flown several airstrikes on behalf of Haftar, while the UAE deployed a mercenary-operated squadron AT-802 Air Tractors (up-gunned crop dusters!) and Chinese-built Wing Loong drones in support of the LNA in 2016. The UAE has also built up large-scale aviation facilities which could be used to support operation by its jet fighters in the future.

Both factions retain around a dozen operational combat jets, as well as a handful of cargo planes and transport and Mi-35 Hind attack helicopters, either covertly donated from abroad or inherited from Qaddafi’s air force.

The two factions’ long-running air war has been documented in detail by Arnaud Delalande. The GNA’s jets fly from Mitiga airport in Tripoli, as well as an airfield in Misrata. They operate two twin-engine MiG-23MLD and one single-engine Mirage F1EQ—both capable third-generation jet fighters. However, their principle combat power comes from roughly a dozen Czech-built L-39ZO Albatros and Yugoslavian-built G-2 Galeb jet trainers.

Jet trainers are easier and cheaper to operate than fighters and can remain effective in the ground attack role in low-intensity conflicts. The L-39ZO weapons trainers used by the GNA can carry up to 2,500 pounds of bombs on four hardpoints, while the Galeb mounts two .50 caliber machine guns but can carry only 660 pounds of munitions.

A few days earlier on April 10, LNA forces alleged having shot down an L-39 based in Misrata over Tripoli. However, unlike the incident with the MiG-21, supporting evidence of a shoot down has yet to emerge.

The LNA Air Force has flown the bulk of over 1,200 air strikes documented in Libya. Its principal base has been Jufra airbase in central Libya, but it uses a satellite strip in Al Watiyah,—just eighty miles west of Tripoli—for attacks on western Libya.

In addition to three MiG-23s and two Mirage F1s, it operates three beefy Su-22 ground attack jets and over a dozen agile MiG-21 single-engine fighter jets, though only a few of the latter are operational. The LNA has received roughly half of its planes from Egypt and the UAE, as well as two surveillance drones. Since establishing ties with Haftar, Moscow has furnished spare parts for the Soviet warplanes.

Both air forces usually dispatch their jets in ones or twos to launch unguided bombs and rockets. In the current battle for Tripoli, LNA Su-22 attack jets and Mi-35 gunship helicopters have been spotted performing dozens of ground attack missions, as have GNA L-39s.

Unsurprisingly, these attacks have resulted in civilian casualties. Airwars.org counts at least thirty-seven civilians killed in the latest air attacks by both sides, including “two doctors, a pregnant woman and a young child.” One GNA bomb apparently demolished a lot full of ambulances in Tripoli.

The two factions have also sought to destroy each other’s aviation on the ground. A MiG-21 flying out of Al Watiyah managed to damage a GNA CH-47 heavy transport helicopter at Mitiga airfield with bomb blasts that cratered the runway. The GNA retaliated with a counterstrike on Al Watiyah that attempted to knock out a parked Il-76 cargo plane but missed.

Haftar’s offensive has so far met with only mixed success. His forces control far more territory than the GNA, but that also means he has longer lines of supply to protect.

Meanwhile, the United Nations has reported over 18,000 civilians have fled the fighting Tripoli. Libya’s long-suffering citizens can only hope an end of the civil war is in sight, but the events of the last nine years have repeatedly dashed the hopes of optimists. For now, the two opposing Libyan Air Forces may continue to exchange blows—with more than a little help from their international backers.