Zap Zap: The Navy Will Soon Have Megawatt Laser Cannons on Its Warships 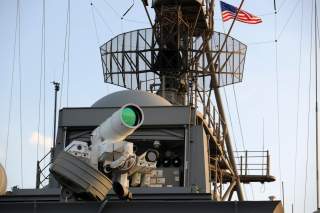 Key point: These lasers will help take out drones and missiles. After a lot of tests, the military hopes for them to become widespread.

David Axe serves as Defense Editor of the National Interest. He is the author of the graphic novels  War Fix, War Is Boring and Machete Squad. This article first appeared in 2019 and is being reposted due to reader interest.