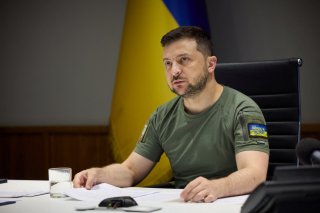 Ukrainian president Volodymyr Zelensky announced on Sunday that he had issued a pair of executive orders dismissing Ukraine’s Prosecutor General, the country’s highest law enforcement official, and the head of the country’s SBU security agency, following suspicion that the two had abetted collaboration with Russia.

The president’s office confirmed later on Sunday that Prosecutor General Iryna Venediktova, who up until her ouster had overseen the SBU’s intelligence collection efforts in the war and had led its effort to document and prosecute Russian war crimes during the invasion, and SBU director Ivan Bakanov, a childhood friend of Zelensky and a fellow member of the president’s Kvartal 95 entertainment company prior to entering public service, had each been fired from their positions.

Although Zelensky did not directly accuse Venediktova and Bakanov of collaborating with the Kremlin in either order, he noted in his daily video address that both agencies had experienced significant problems with collaboration since Russia’s invasion of Ukraine in late February. The president claimed during that address that at least sixty members of the two organizations had defected to Russia in the early months of the invasion, and another 651 had been the subject of treason charges—calling into question the effectiveness of the organizations’ leadership.

“Such an array of crimes against the foundations of the national security of the state … pose very serious questions to the relevant leaders,” the president said. “Each of these questions will receive a proper answer.”

Zelensky also announced in a separate executive order that Venediktova would be replaced with her deputy, Alexei Symonenko.

The Ukrainian leader had observed in the same address that Sunday marked the eighth anniversary of the shootdown of Malaysia Airlines Flight 17, a civilian aircraft traveling from Amsterdam to Kuala Lumpur, leading to the deaths of nearly 300 passengers and crew from ten different countries. The aircraft was downed over Ukraine’s eastern Donbass region, where government forces have battled pro-Russian separatists in the breakaway Donetsk People’s Republic and the Luhansk People’s republics since 2014. Both sides have accused the other of shooting the Malaysian aircraft down, although the Dutch-led investigation of the incident faulted a Russian missile fired from a rebel-controlled area.

Zelensky described the shootdown as an “obvious act of terrorism” and compared it to other hostile acts against Ukrainian civilian targets, including a recent Russian missile attack on Vinnytsia, a city in western Ukraine, killing a four-year-old girl and seriously injuring her mother.

“It is definitely possible to bring all Russian war criminals to justice,” he added.