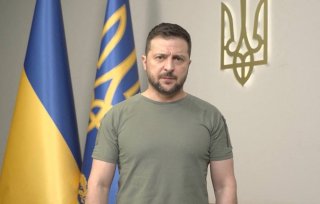 The Ukrainian president demanded the revocation of Russia’s rights and privileges within multilateral institutions. “Reject the right to vote. Deprive delegation rights. Remove the right of veto—if it is a Member of the UN Security Council. In order to punish the aggressor within the institutions,” he said. He called for establishing a “Special Tribunal” to “punish Russia for the crime of aggression against our state.”

“We can return the Ukrainian flag to our entire territory. We can do it with the force of arms. But we need time,” Zelenskyy said, dismissing further peace talks as Moscow’s ruse to buy more time to prepare for new offensives in the winter months. “We cannot agree to a delayed war. Because it will be even hotter than the war now,” he said.

Zelenskyy repeated his long-standing calls for Russia to be recognized as a state sponsor of terrorism, citing the Kremlin’s threats to employ nuclear weapons and reports of Russian war crimes in Ukraine.

“I rule out that the settlement can happen on a different basis than the Ukrainian peace formula,” he said, reaffirming his government’s position that peace can only come through Ukraine’s decisive victory over Russia.

The assembly voted last week to allow Zelenskyy to be the only leader to deliver a pre-recorded address. The Ukrainian president named and rebuked the seven countries—Belarus, Cuba, North Korea, Eritrea, Nicaragua, Russia, and Syria—that voted against it. “I want to thank the 101 countries that voted for my video address to take place. It was a vote not only about the format. It was the vote about principles,” he said. "Seven. Seven who are afraid of the video address. Seven who respond to principles with a red button. Only seven. One hundred and one—and seven.”