Zero Tanks? The Marines Think Main Battle Tanks Are Things of the Past 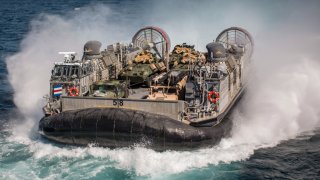 The U.S. Marine Corps plans to operate a fleet of exactly zero main battle tanks as part of a service-wide transition from a heavier, mechanized force into an expeditionary and more deployable networked force.

The Corps’ Force Design 2030 document articulates the need for the service to adapt and evolve to operate in fast-paced, multi-domain threat environments in which enemy forces have long-range precision weaponry, high-fidelity sensors, and unmanned systems. As a result, the Marines recognize the need to have a faster and more deployable amphibious force capable of quickly and lethally transitioning from sea to land.

More specifically, this means that the Corps is officially divesting all of its main battle tanks, instead choosing to arm its faster tactical and reconnaissance vehicles with anti-tank weapons. The text of the Force Design 2030 document outlines the Corps’ rationale for divesting its tanks: “we have sufficient evidence to conclude that this capability, despite its long and honorable history in the wars of the past, is operationally unsuitable for our highest-priority challenges in the future. Heavy ground armor capability will continue to be provided by the U.S. Army.”

Seventy-ton main battle tanks are heavily armored, but they are very difficult to deploy and need to be massed over time through the use of transport ships and pre-combat staging areas. Tanks also require a significant amount of sustainment and logistics support, including large amounts of fuel. Tanks can also have great mobility limitations, as they are unable to cross certain bridges or pass through more narrowly configured passageways. This, according to the Corps, makes them less optimal for the fast pace of amphibious warfare operations.

The divestment is also made possible by the advent of transportable anti-armor weapons capable of destroying targets with precision. For example, the Force Design 2030 document details plans to arm Joint Light Tactical Vehicles with multi-canister launchers to transport and fire Javelins and other anti-armor munitions. The concept is to leverage longer-range sensing and targeting, in coordination with surveillance and speed, to launch hit-and-run anti-armor attacks with a faster and more dispersed force.

The Corps’ strategic adjustment is, among other things, specifically geared toward enabling operations in the Indo-Pacific, where fast-paced, island-hopping operations are needed. While the plan recognizes the importance of armored vehicles, its call for more Advanced Reconnaissance Vehicles recognizes the value of speed and forward surveillance.