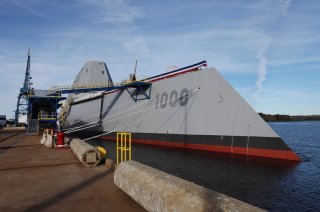 The U.S. Navy’s troubled Zumwalt-class of destroyers will have an important new mission. Rather than supporting disembarked forces onshore, Zumwalt-class ships will instead become a platform for the Navy’s most advanced weapons: hypersonic missiles.

The Zumwalt-class was designed to be an incredibly innovative new class of warship. Featuring a unique hull design specifically sculpted to defeat enemy radar, the ship also housed a pair of long-range naval guns. Carried inside specially designed and stealthy housings, the guns were to fire munitions in support of disembarked Marines and other forces near shore. There was, however, a significant catch.

The 155mm naval guns were to launch precision munitions at targets over seventy miles away. But the Navy discovered a huge issue late in their development.

At around $1,000,000 per shell, the naval artillery system was just too expensive to be put into production. The significant cost issues effectively ended the ships’ shore bombardment mission. But although the Zumwalt-class’ original mission came to an end, the U.S. Navy would like to take advantage of its advanced—and stealthy—design.

By around 2025, at least one Zumwalt-class ship will have a pair of missile launch tubes installed somewhere on both sides of the ship.

Adm. Mike Gilday, Chief of Naval Operations, told USNI News that “there’s plenty of room right now for those modules.” He added that the Navy’s three Zumwalt-class ships will be the first in the Navy to receive hypersonic missiles. “Zumwalt gave us an opportunity to get [hypersonics] out faster and to be honest with you I need a solid mission for Zumwalt,” Gilday explained.

The hypersonic weapon in question is the Common Hypersonic Glide Body, also known as the C-HGB, which is currently being developed for use with the U.S. Navy, Air Force, and Army.

The Army is moving at a faster pace in its development of the Common Hypersonic Glide Body missile, with plans to press it into service in 2023. The Navy’s latest Block-V Virginia-class submarines will have to wait until 2028 to get the missiles.

Though the Zumwalt’s troubled and ultimately unsuccessful role as a shore bombardment and support platform has been a headache for the Navy, introducing a state-of-the-air hypersonic weapon to the platform could go a long way in revamping an incredibly advanced but under-utilized platform.