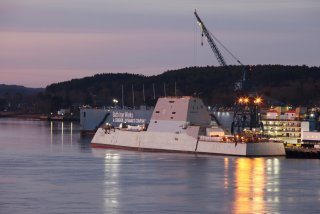 Here's What You Need to Remember: One of the United States’ most advanced ships just successfully test fired one of the Navy’s state-of-the-art weapon systems.

In a recent press release, the U.S. Navy announced the successful live fire test of the Mk 57 Vertical Launch System using a Standard Missile, one of America’s surface-to-air naval missiles.

“Today’s successful test not only demonstrates the ship’s capability to fire missiles and conduct self-defense, it is also a significant step toward more advanced combat system testing and operations for our Navy’s most technically innovative warship,” explained U.S. Navy Capitan Matt Schroeder. “The USS Zumwalt crew and Surface Development Squadron One are working hand-in-hand with the acquisition community to advance this ship’s operational capability.”

The test was essentially a proof of the class’ design and was intended to ensure that the ship’s hull wouldn’t be degraded or otherwise compromised by the force of a live missile fire.

But despite the rosy-sounding pronouncement, the Zumwalt’s actual situation is less than stellar.

The Zumwalt-class' stealthy design promised a revolution in Naval warfare. Unfortunately this hasn't happened. The class also featured a number of advanced new technologies never before seen in the U.S. Navy, let alone any other country’s navy. Most obviously is the class’ unique tumblehome hull shape, essentially an inverted V shape.

The Navy claims that this hull shape allows the massive Zumwalts to have a radar cross section similar to that of a small fishing boat, despite being thirteen feet wider and 100 feet longer than an Arleigh Burke-class destroyer.

While the unique hull shape does offer stealth advantages, questions have been raised about the class’ sea-worthiness in high sea state conditions. Rather than riding over incoming waves, the Zumwalt’s inverted bow design pierces through them. Naval architects have stated that in certain conditions, the design could be unstable and cause the tumblehome design to capsize.

In addition to potential design problems, the Zumwalt-class has also had weapons issues. The class was to be equipped with the Advanced Gun System, a 155mm naval gun that fires a long-range projectile. The guns were to be fired in tandem and would have given the Zumwalt platform a prodigious amount of firepower. Unfortunately, the AGS was canceled by the Navy, which cited very high operating costs. The price tag for each 155mm shell? $1,000,000.

Ultimately, only a paltry three Zumwalt-class ships were built for the U.S. Navy. Massive cost overruns automatically triggered the Nunn-McCurdy Amendment, a piece of legislation from the early 1980s that automatically cancels programs that encounter costs 50% or greater than original estimates.

Though the class may very well represent the world’s stealthiest ships, their ultimate success as a capable U.S. Navy platform is severely hampered by their tiny three-hull class size—regardless of what weapons they could fire now or in the future.

Though the Navy likely won’t want—or be able—to invest much more money into the program, there has been talk about mounting an advanced electrically-powered rail gun to the third and final Zumwalt. Watch this topic for more information in the future.