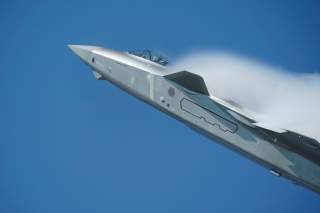 A British defense company was granted an “open individual export licence” for the sale of “target acquisition, weapon control and countermeasure systems” for aircraft, helicopters and drones to China’s People’s Liberation Army Air Force. The transaction, approved two months after British prime minister Theresa May’s January Beijing visit, is unprecedented for the Sino-British arms trade relationship in that it does not place a cap on the volume of goods that the British firm—unnamed by the British International Trade Department as of the time of writing—can export to China.

China has made selective strides in radar technology over the past decade, particularly in their continued development of quantum radar systems to counter fifth-generation stealth fighters. But there remains room for refinement in more traditional radar airborne radar technology, and British firms such as Kelvin Hughes have long occupied a prominent research role in the military radar industry. The South China Morning Post, which first reported the story earlier this week, cites Xidian University military radar scientist Cao Yunhe for further insight into the Chinese intentions behind their investment: “If they are willing to sell we are willing to buy,” he said. “We want to know how their systems operate. It will help us improve our own design.” The specific radar models and components being exported are unknown at the time of writing, but—in keeping with modern arms market trends—the Chinese are unlikely to receive Britain’s most cutting-edge military radar technology. As Yunhe put it, “There will always be some restrictions. If not on quantity, then on quality.”

The Chinese modus operandi to reverse engineer technologies instead of adopting them wholesale has been a central plank of their air force development strategy, starkly illustrated in their longstanding procurement and modification of SU-27 and SU-35 jets. Similar trends have been observed in the Chinese integration of everything from the the American FGM-148 Javelin as the Hongjian-12 Red Arrow to the General Atomics MQ-1 Predator UAV as the Chengdu Wing Loong “Pterodactyl.” This approach is motivated by several strategic considerations. First, investment into homegrown supply chains leads to economies of scale that are cheaper and more efficient than the selective importation of hardware. This is especially important not only for their capacity project military power around the world, but for China to actualize the role of global weapons exporter that it envisions for itself. Second, close British collaboration with U.S. intelligence poses tangible security risks for China’s unmodified use of British military equipment. Even barring the employment of embedded backdoor technologies, the Chinese want to give adversaries as little insight into their defense system makeup as possible. However, some experts remain skeptical of the viability of China’s reverse engineering strategy in the absence of the technical and manufacturing base required to reliably reproduce military-grade technology. According to Atlantic Council Senior Fellow Roger Cliff, “Just buying examples of technologies, however, doesn't immediately convey the ability to make them oneself.” Cliff goes on to observe that “China has had access to that [SU-35] technology for over 20 years and apparently is still struggling to make its own high-performance turbofan engines.”

Britain, for its part, is seeking to diversify their military trade relationships as part of their ongoing extrication from the European Union. Britain’s arms exports to China totalled £11.8m in 2017 and is on an upward trajectory despite an arms embargo still nominally in effect. This move on the part of a key U.S. ally is sure to ranckle Washington, as the Trump administration struggles to muster a united western front in its sanctions against Chinese defense firms.