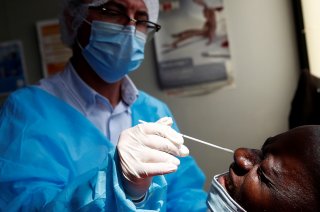 The novel coronavirus might be grabbing most of the headlines these days, but people often forget that over the past hundred-plus years, there have been several other notable virus-related pandemics that were responsible for millions of lives lost.

Even in an average year, the seasonal flu virus can be incredibly deadly. According to a 2017 collaborative study by the Centers for Disease Control and Prevention and global health partners, between 291,000 and 646,000 people worldwide die from influenza-related respiratory illnesses each year.

In the United States, on average, between nine and forty-five million Americans catch the flu each year, which leads to anywhere between 12,000 to 61,000 deaths. Between October 2019 and April 2020, CDC’s data revealed that there were an estimated thirty-nine to fifty-six million influenza infections and 24,000 to 62,000 fatalities.

More than eight months into the current pandemic, roughly 810,000 deaths have been reported due to COVID-19, according to the latest data from Johns Hopkins University. A substantial and fast-growing figure for sure, but it pales in comparison to the total number of lives taken in other major flu outbreaks. Let’s take a closer look at five of them.

Known as the “Russian Flu,” this particular influenza outbreak is believed to have started in St. Petersburg, but it quickly made its way across Europe and rest of the world. It was also one of the first pandemics to be covered widely by newspapers via telegraph reports. At the conclusion of the outbreak, an estimated one million people had died.

The 1918 flu outbreak is often remembered as the deadliest pandemic in recent history. Lasting from February 1918 to April 1920, the contagion infected a third of the world’s population in four successive waves and killed at least fifty million people—roughly 675,000 of them in the United States, according to the CDC. The estimated population in the United States in July 1918 was roughly 103 million—so approximately 0.65% of the entire population died from the virus.

First reported in Singapore in February 1957, the new H2N2 virus spread throughout China and other nearby countries before arriving in the United States by that summer. About 1.1 million people died worldwide, including 116,000 in the United States, according to the CDC.

H3N2, the virus responsible for this outbreak, is believed to have evolved from the strain of influenza that caused the 1957 pandemic through “antigenic shift”—a process by which two or more different strains of a virus, or strains of two or more different viruses, combine to form a new subtype. According to the CDC, an estimated one million people died worldwide, with 100,000 of those deaths occuring in the United States.

In 2009, the H1N1 virus emerged in the United States and spread quickly around the world. Initially called the “swine flu,” this particular subtype of virus contained a brand-new combination of influenza genes that had not previously been identified. The CDC estimates that between 151,700 and 575,400 people died worldwide during the first year that this virus circulated. Surprisingly, roughly 80% of the fatalities are believed to have been individuals under the age of 65.