Anthony Fauci Doubts Coronavirus Will Be Eradicated by Vaccine 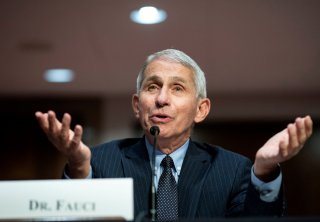 The nation’s top infectious disease expert was impressed by Pfizer’s early vaccine data that showed 90 percent efficacy, but he warned that the general population shouldn’t become complacent and ignore simple public health measures that have been proven to limit the spread of the virus.

Fauci had previously said that a vaccine that’s 50 to 60 percent effective would be acceptable.

“The cavalry is coming but don’t put your weapons down, you better keep fighting because they are not here yet. Help is on the way, but it isn’t here yet,” Fauci said Thursday during a webinar hosted by the policy institute Chatham House.

“So, to me, that is more of an incentive of, ‘Please don’t give up. Don’t despair, the end is in sight,’ as opposed to: ‘Hey, we are good to go, don’t worry about anything.’ We are not good to go. We have got to continue to double down on public health measures.”

Despite the positive news on the vaccine front, the United States is currently mired in a devastating third wave that saw more than 143,000 new cases on Wednesday, setting a new one-day record, according to data from Johns Hopkins University.

The seven-day average in the country now sits at more than 127,000 cases, which is nearly 35 percent higher than just a week ago. In the first ten days of November, more than one million new coronavirus cases were reported. According to the COVID Tracking Project, about 65,000 individuals are currently hospitalized due to the disease, further straining the resources of doctors and hospitals.

To date, the United States has witnessed more than 10.5 million cases and 242,000 related deaths—both the highest in the world.

However, Fauci, the director of the National Institute of Allergy and Infectious Diseases, noted that the United States will eventually be able to make the pandemic more manageable, but he admitted that the virus might never be eradicated.

“I doubt we are going to eradicate this. I think we need to plan that this is something we may need to maintain control over chronically. It may be something that becomes endemic, that we have to just be careful about,” he said.

“Certainly, it is not going to be a pandemic for a lot longer because I believe the vaccines are going to turn that around.”