Anthony Fauci: The Highest-Paid Employee of the Federal Government 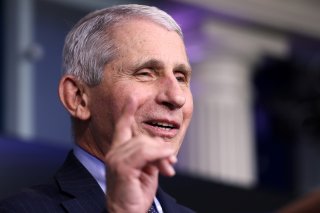 Ever since the start of the coronavirus pandemic, Dr. Anthony Fauci has been one of the government’s most public faces. The longtime head of the National Institute of Allergy and Infectious Diseases (NIAID) has at times been a controversial figure, especially when he clashed with former President Trump. Fauci has remained in his position in the Biden administration and has in recent days been doing a round of media interviews, opening up for the first time publicly about his disagreements with the previous administration.

Fauci, it appears, has been well-paid for his services.

Adam Andrzejewski, of an organization called Open the Books, wrote an op-ed for Forbes in which, citing data obtained by the group from Freedom of Information Act requests, he stated that Fauci made $417,608 in 2019. That makes Fauci the highest-paid employee in the federal workforce. The year 2019 is the most recent year that such statistics are available.

Jeffrey Lyash, the CEO of the Tennessee Valley Authority, was paid $8 million in 2019, which led to a controversy at the time that then-President Donald Trump even weighed in on. Forbes, however, states that Lyash doesn’t count as a federal employee, since his salary is paid for by the revenues of that government-owned corporation.

The report also found that Fauci got a raise from $335,000 in 2014 to his current salary. The president, by contrast, has a $400,000 salary, with most other top leaders in the government earning salaries in the low six figures. Dr. Deborah Birx, also a doctor who was part of the Trump-era coronavirus task force, earned $305,972 in 2019.

Why is Fauci so highly paid? There are a few reasons. For one thing, he’s someone in possession of more specialized skills than those of most high-ranking people in the federal government.

Even more crucially, there’s his unusual longevity. Fauci has been in his position at NIAID since 1984, and Joseph Biden is the seventh U.S. president he has served. Fauci, who turned eighty in December, has also continued working much longer than high-level government employees typically do. Many lawmakers, appointees and even presidents have left government positions and made much higher salaries afterward; Fauci never has.

Successive administrations have apparently determined that it was better to keep Fauci in his position than to replace him with someone else, who would presumably earn a lower salary.

The Forbes article quotes Fauci, from an interview last year with actor Matthew McConaughey, stating that “I am a government worker. I have a government salary,” and implying hypocrisy since his salary is so high.

However, it’s likely that Fauci, at some point in the last forty years, has had opportunities to decamp for the private sector and earn a much higher salary than even the $417,608 he’s making now. But that’s something he has never chosen to do. And none of the numerous conspiracy theories about Fauci secretly having an ownership stake in different companies behind treatments or vaccines have ever borne out.

Indeed, Forbes reports that some government salaries are exempt from caps in level IV of the Executive Schedule, in order  to “make federal salaries for doctors and scientists more competitive with the private-sector.”

In many states, the highest-paid public employee is a college football or basketball coach at the state university, who in numerous cases is more highly paid than, say, the governor. And speaking of sports, Fauci’s salary is still more than $100,000 less than the minimum salary ($555,000) for Major League Baseball players.