Christmas Danger: U.S. Will See a Coronavirus ‘Surge Upon a Surge’ 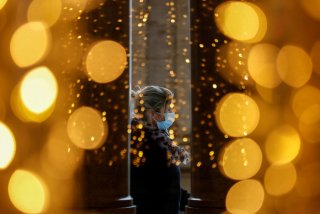 The nation’s top infectious disease expert is anticipating a “surge upon a surge” of coronavirus cases just weeks away from Christmas and New Year’s Eve.

“If you look across the United States, we are really in a public health crisis right now,” White House coronavirus advisor Dr. Anthony Fauci told Colorado Gov. Jared Polis during a livestream session on Tuesday.

“Now that we’re in the mid- to late fall, merging on into the winter, we’ve seen, because a variety of circumstances, a surge that has really surpassed the others.”

Despite stern calls from health officials to stay home over the holiday, more than 9.4 million people were screened in the Thanksgiving travel period, which started on the Friday before the holiday, according to data from the Transportation Security Administration. On Sunday alone, when many Americans were returning home from their Thanksgiving travels, the TSA revealed that it screened 1.17 million people.

Since the pandemic ground air travel to a halt in mid-March, checkpoints have screened more than one million passengers in only five days. Four of those days came over the Thanksgiving holiday period.

Given the high number of people who traveled and shared meals in close proximity with family and friends, the United States will likely see a “surge upon a surge” in new cases, Fauci said.

“One of the things that you should keep your eye on is that as we get two to three weeks beyond the Thanksgiving holiday, that it is likely . . . you’re going to start seeing the curve that had gone to flatten out go back up again, unless people really have done a considerable degree of mitigating,” the director of the National Institute of Allergy and Infectious Diseases added.

More troubling is the fact that cases were already rising before the Thanksgiving holiday and that trend has only continued.

New daily cases in the country recently reached a grim single-day record of 200,000, and the rolling seven-day average of new cases is now more than 160,000. Florida on Tuesday became the third state to surpass one million confirmed cases, joining Texas and California.

On Monday, former U.S. Food and Drug Administration Commissioner Dr. Scott Gottlieb warned that nearly a third of Americans will likely be infected with the virus by the end of 2020.

In all, there are roughly 13.8 million confirmed coronavirus infections in the United States, along with 271,000 related deaths. The virus is now killing, on average, more than 1,400 people each day in the country, according to the latest data compiled by Johns Hopkins University.

“This is something that is quite problematic, and to say it’s challenging is to really say the least,” Fauci said.