Fauci: Coronavirus Restrictions on Christmas and New Year’s May Be Necessary 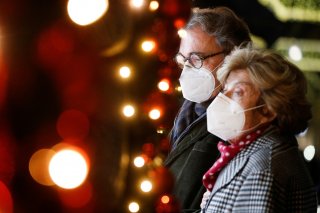 “What we expect, unfortunately, as we go for the next couple of weeks into December, is that we might see a surge superimposed on the surge we are already in,” the nation’s top infectious disease expert said Sunday in an interview on NBC’s “Meet the Press.”

“I don’t want to frighten people, except to say it is not too late to do something about this.”

There are roughly 13.4 million confirmed coronavirus infections in the United States, along with 267,000 related deaths, according to the latest data compiled by Johns Hopkins University.

New daily cases in the country recently reached a grim single-day record of 200,000, and the rolling seven-day average of new cases is more than 162,000. With the Thanksgiving holiday recently concluded, that figure is expected to rise considerably, health experts have warned.

Despite the U.S. Centers for Disease Control and Prevention calling on Americans to stay home this holiday season, more than nine million people passed through airport gates in the week running up to Thanksgiving and the weekend following it.

Fauci urged Americans to take extra precautions as they return from their holiday travels and continue to adhere to public-health measures like mask-wearing and social-distancing.

“I think we are going to have to make decisions as a nation, state, city, and family that we are in a very difficult time, and we’re going to have to do the kinds of restrictions of things we would have liked to have done, particularly in this holiday season, because we’re entering into what’s really a precarious situation,” said the director of the National Institute of Allergy and Infectious Diseases.

Fauci added that it is up to all Americans to help alleviate pressure on hospitals and clinics already running at full capacity and avoid potential lockdowns and even more stringent restrictions.

“We’ve got to realize that we do have within our capability to be able to blunt that by doing the simple things that we talk about short of locking down, so we don’t precipitate the necessity of locking down,” he said.

On Sunday, Dr. Deborah Birx, the coordinator of the White House coronavirus task force, contended that the United States is mired in a more difficult situation than the period after Memorial Day weekend.

“We saw what happened post-Memorial Day. Now we are deeply worried about what could happen post-Thanksgiving because the number of cases—25,000 versus 180,000 a day—that’s why we are deeply concerned,” she said in an interview on CBS News.

“We know people may have made mistakes over the Thanksgiving time period. If you’re young and you gathered you need to be tested about five to ten days later, but you need to assume you’re infected and not go near your grandparents and aunts and others without a mask.”