Governors, Mayors Roll Out Sweeping Restrictions Ahead of Thanksgiving 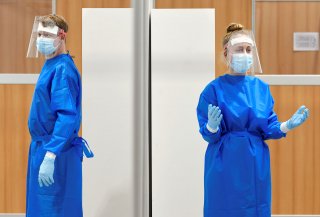 With Thanksgiving only about a week away, many states hard hit by the coronavirus are rolling out sweeping lockdowns and restrictions in an effort to contain the unrelenting spread of the virus.

The United States now has eclipsed 11.2 million coronavirus cases and registered nearly 250,000 related deaths—both figures the highest in the world, according to the latest data from Johns Hopkins University. That’s an unsettling one million new infections in just one week and two million since the beginning of this month.

Due to the surging number of cases, the U.S. Centers for Disease Control and Prevention updated its forecast to state that newly reported deaths “will likely increase over the next four weeks, with 5,500 to 13,400 new deaths likely to be reported in the week ending December 5, 2020.”

In response, California Gov. Gavin Newsom has announced that he is pulling the “emergency brake” on efforts to reopen businesses, saying that if no action is taken, it will lead to “catastrophic outcomes.”

Washington Gov. Jay Inslee has ordered gyms, bowling alleys, movie theaters, museums, and zoos to shut down indoor operations and all stores must limit capacity to 25 percent. He has also banned people from different households from gathering indoors unless they have quarantined first.

Chicago Mayor Lori Lightfoot has called on residents in the nation’s third-largest city to restrict social gatherings to ten people and stay at home as much as possible for the next thirty days. Last week, she asked all citizens to cancel their Thanksgiving plans. “This is serious life and death,” Lightfoot said during a press conference.

Minnesota Gov. Tim Walz has issued an order limiting indoor and outdoor gatherings to ten people. In addition, the gatherings should only involve members from three households or less, including the host.

North Dakota Gov. Doug Burgum, who has resisted a statewide mask mandate since the pandemic began, put one in place over the past weekend. The state has one of the most rapidly spreading coronavirus outbreaks, per capita, in the country. “Our situation has changed, and we must change with it,” Burgum said during a press conference.

Iowa Gov. Kim Reynolds shared similar sentiments as she also announced a statewide mask mandate on Monday. She, however, had for months disparaged face-covering restrictions as “feel good” measures.

“If Iowans don’t buy into this, we lose,” Reynolds said during a press briefing. “Businesses will close again. More schools will be forced to go online and our health-care system will fail. The cost in human life will be high.”

Under the new guidelines, any individual over the age of two must wear a mask when in an “indoor space that is open to the public and within six feet of individuals who are not members of their household for fifteen minutes or longer.”

Indoor gatherings with more than fifteen people are prohibited as well. “No one wants to do this,” Reynolds added. “I don’t want to do this especially as we’re coming into a holiday season that is normally filled with joy. I cherish Thanksgiving with my family and this year, we’re postponing that.”

Dr. Jill Foster, a professor at the University of Minnesota Medical School, told the National Interest that “we need to support our governors since they have the best information on our individual regions.”

“We have learned so much since the beginning of the pandemic of what does work that it’s more useful to focus on implementing measures that have a high impact with lesser disruption of the economy,” she said.

“We need to stop swapping air as closely as we are. Wearing a face covering is the best example of that. People can at low cost reduce their own and others risk without changing their behaviors of how and where they shop, and in most cases, continue their jobs and recreation. Beyond that, not congregating in groups outside their own household and keeping a distance when they need to be with others is somewhat harder, but not impossible. Americans have strength in ingenuity in solving so many problems, but there are still pockets of paralysis in coming up with creative solutions preventing the spread.”

Dr. Dean Winslow, an infectious-disease specialist at Stanford Health Care, noted that engaging in proactive measures now could offer immense benefits until a vaccine can be distributed widely to the general public.

“Many of us feel that nationwide restrictions on indoor dining, bars, gyms, indoor religious services, and other indoor gatherings would be very appropriate until a significant proportion of the population is immunized against COVID-19—and that might be a year from now,” he told the National Interest.

Like in many other states, hospital resources in Iowa have been hit particularly hard as more coronavirus-positive patients are admitted. A record-breaking nearly seventy thousand people are hospitalized with the coronavirus in the United States, which is thirteen thousand more than a week earlier, according to the COVID Tracking Project. Deaths have eclipsed more than eleven hundred per day on average, an increase of more than 50 percent from early October.

“Our hospitals are just on the cusp of being overrun,” Dr. Jason Keonin, of Northwest Iowa Surgeons PC, in Spencer, Iowa, told the National Interest.

“We are even to the point of canceling some surgical cases to make sure we have enough beds available. Most of our referral hospitals are full and not able to accept transfers, so the outlook is not good for our patients that get really sick. I just recommend that people take this seriously.”