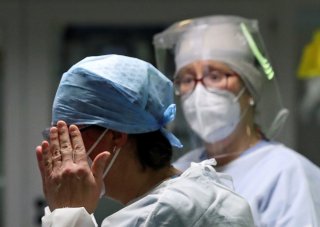 The novel coronavirus is continuing its relentless march across the state of North Dakota.

According to the North Dakota Department of Health (NDDoH), another thousand-plus resident tested positive on Thursday, lifting the state’s active case count to more than 6,300.

The COVID Tracking Project has reported that North Dakota has had more than 1,224 new cases per 100,000 people over the past two weeks, which ranks first in the nation. Researchers at Johns Hopkins University have stated that the rolling average number of daily new cases has increased by more than 73 percent in the last two weeks.

Since the start of the nine-month-long pandemic, nearly 800,000 tests have been administered to North Dakotans, with roughly 35,000 testing positive for the virus.

Most of the worst outbreaks in the United States currently are in sparsely populated small cities and towns in the Midwest. While earlier peaks witnessed coronavirus cases concentrated mainly in larger cities and suburbs, the current surge is the most geographically dispersed yet.

For months, less-populated states like North Dakota, with a total of 760,000 residents, though they were largely protected by the fact of having smaller populations and being more geographically remote. Compounding the problem was that many citizens had more relaxed attitudes on mask mandates and social distancing.

A twenty-one-year-old Fargo resident named Thomas, who didn’t want to reveal his full name, told TNI that he and his work colleagues at a local software company really don’t think much about the virus other than seeing reports on the news.

“I’ll wear a mask when I go grocery shopping, but that’s something that I really don’t think about,” he said. “I do it and just go on with my day. I really don’t sit there and worry too much about getting the virus.”

Case counts have reached such high levels—many in remote counties that often lack a hospital or other critical health-care resources—that the state’s health officials are now asking residents to conduct their own contact tracing if they have tested positive.

There continues to be a large backlog of coronavirus case investigations, according to a recent tweet posted by the NDDoH.

“Please be advised: NDDoH and local public health units are currently experiencing a backlog of COVID-19 case investigations, causing a delay in calls. If you have tested positive for COVID-19, please isolate and inform any close contacts you’ve had that they should get tested,” the post reads.

NDDoH added in a statement that a “sharp increase” in coronavirus cases in recent weeks “has put increased pressure on contact tracing teams at the state and local level, leading to tracing delays and a backlog of positive cases that have yet to be assigned to a case investigator.”

“This temporary situation required an immediate and significant shift in resources to provide results in a timely manner to individuals who test positive to protect their health and slow the spread of COVID-19,” Governor Doug Burgum said in a statement.

Back in March, Burgum issued an executive order closing bars and restaurants. He eventually allowed restaurants to operate at 50-percent capacity, in addition to making sure customers are properly wearing masks and social distancing.

For Jazmine Schultz, the co-owner of Prairie Sky Breads in Minot, she is ready if more measures are initiated to help limit the virus’ spread.

“We already have curbside up, our delivery up,” she told the local news station KX News. “All of those things are in place for us. So, I think the transition would be a lot easier for us.”

“I don’t know if there is an answer if we got back to a shutdown status,” he told KX.