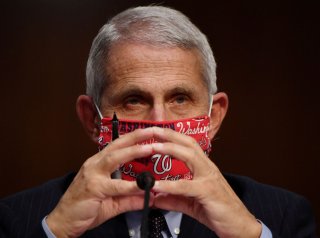 White House health advisor Dr. Anthony Fauci has praised New York for setting an example for the rest of the country of how to successfully lower the number of coronavirus cases.

Fauci, the director of the National Institute of Allergy and Infectious Diseases, noted that when guidelines are followed along with ramped-up testing, states will be able to see improved numbers.

“Again, we have a problem. We need to admit it and own it. But we have got to do the things that are very clear that we need to do to turn this around, remembering we can do it,” Fauci said in a recent interview with Judy Woodruff on PBS NewsHour.

“We know that, when you do it properly, you bring down those cases. We have done it. We have done it in New York. New York got hit worse than any place in the world. And they did it correctly by doing the things that you’re talking about.”

New York was once the epicenter of the coronavirus outbreak in the United States, as it witnessed more than 10,000 new cases per day during its peak in April. More than 400,000 New Yorkers have been infected since the pandemic began and at least 32,000 people have died.

Governor Andrew Cuomo responded by putting into place some of the strictest reopening requirements in the country, which included months-long stay-at-home directives and shutdown of businesses.

According to the tracking project COVID Act Now, less than 1% of New Yorkers tested for the virus were positive late last week—down from a high of over 40%.

As cases in other regions of the country continue to rise and hit new record highs, Fauci asserted that the key to containing the contagion is to get the tests to the right places.

“We have got to use them in the right manner,” he said. “We have got to get them to the right people who can do the proper identification, isolation and contact tracing, and even go beyond that, Judy, to be able to test more widely in a more surveillance way, so you can get a feel for the extent and the penetrance of this community spread.”

Fauci also urged people to wear face masks and coverings and pushed for the closure of bars to limit the spread.

“Stay away from crowds. Close the bars,” Fauci said. “You appeal to the people in the local areas, close those bars. They are seriously the—one of the major reasons why we’re seeing (the surges). And I think, if we do that for a couple of weeks in a row, I think we’re going to see a turnaround, because we know that that works.”

There are now more than 14.2 million confirmed cases of coronavirus worldwide, including at least 602,000 deaths, according to the latest data from the World Health Organization.