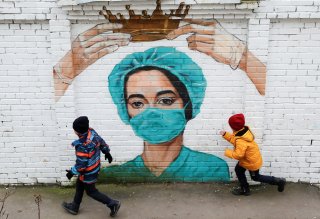 Back when the coronavirus hit its peak at the end of March in some of the most congested areas in the U.S. like New York, New Jersey and California, the Midwest could be considered as one of the safest regions to isolate from the deadly disease. While New York averaged nine thousand new cases each day, Wisconsin yielded less than two hundred.

Once a nearly coronavirus-free zone, rural Wisconsin is now a newly emerged hotbed for the virus, ranking in the top ten for states with the highest number of infections.

Dr. Anthony Fauci, the nation’s top infectious disease expert, warned of a brutal second-wave months ago and suggested that the rate of new infections could reach one hundred thousand a day—a figure that’s already been widely surpassed.

“I can’t make an accurate prediction, but it is going to be very disturbing, I will guarantee you that,” Fauci said in July, “because when you have an outbreak in one part of the country, even though in other parts of the country they are doing well, they are vulnerable.”

At the time of Fauci’s remarks over the summer, states that have become the epicenters for the virus including Wisconsin, Minnesota and Michigan hadn’t yet experienced a deadly coronavirus outbreak, as hospitalizations remained manageable and small businesses stayed somewhat afloat.

But now the virus has rampaged the Midwest, pushing the country’s total case count to nearly 11.1 million and 246,000 deaths, with almost all of the U.S. states experiencing a surge in cases within the last two weeks, according to Johns Hopkins University data. These figures indicate a virus that’s spreading at an unseen rate compared to previous months, with a new single-day high of 177,000 on Friday.

“In the Midwest, it’s much like the waves, ocean waves. You’ll just see one big wave coming and then you’re on their surfboard . . . you’re waiting for the next one,” Kenneth Foard McCallion, healthcare infrastructure expert and author of the new book, COVID-19: The Virus That Changed America and The World, said. “And so it’s really washing through the country and it’s hitting places now . . . in the midwest who—as terrible it is getting the virus—getting the virus having to be hospitalized, but not have the hospital capacity is catastrophic.”

In both Wisconsin and Michigan—two states that hit their daily case count peaks on Nov. 13 at 7,257 and on Nov. 11 at 6,674, respectively, according to Johns Hopkins University data, hospital systems have sounded the alarm over the lack of beds and medical supplies, as well as heavily packed emergency rooms.

“It’s well above what we can tolerate right now and still save lives. I don’t know why it’s continuing to get worse. From a health care standpoint, we're tapped out,” Dr. Ashok Rai, Prevea Health president and CEO in Wisconsin, told a CNN affiliate last week. “Our beds are getting full every day. Nurses are exhausted. Physicians are exhausted. We’re exhausted.”

Michigan Gov. Gretchen Whitmer (D) announced a new round of restrictions that orders all high schools and colleges to operate remotely, as well as limiting bars and restaurants to outdoor dining, take out and delivery.

With the country’s seven-day moving average at roughly 140,000 cases as of Monday, both lawmakers and public health experts have cautioned that “dark” days lay ahead, especially as businesses continue to reopen with access to indoor dining and activities and Americans grow lax in following basic preventative measures—like mask-wearing, social-distancing and frequent hand sanitizing.

Biden pledged to “turn this pandemic around” once his administration takes office in January—an allegiance that could indicate a multi-week national economic shutdown to tame the spread of the virus until a vaccine is available—and encouraged Americans to wear face coverings while in public, as “a mask remains the most potent weapon against the virus,” he said.

While most states have implemented a statewide mask mandate in recent months other states—including a few in the Midwest—have not imposed the order. A mask mandate, however, won’t make the virus disappear, but it would help bring hospitalizations and the overall rate of infection to controllable levels.

But McCallion attributed some disparities in the public health response to the pandemic to the “disinformation campaign” from the White House that “is confusing and undercutting of the serious attempts by public health officials to get the virus under control.” Even though President Donald Trump contracted the virus in October and had to be hospitalized for about four days, he has rejected enforcing a nationwide mask mandate to tame the spread of the deadly disease.

Trump has dubbed the virus as nothing more than the common flu—a claim that’s been discredited by public health experts—which has triggered “a signal to disregard any masking requirements or social distancing requirements,” according to McCallion, especially in states that voted for the president in 2016.

“The White House, and then the Republican governorships and legislatures have recklessly determined that it’s in their political interest to politicize the issue, make it a personal liberty issue, rather than a public health issue,” McCallion said. “However, it’s leading to the unintended consequence that it is actually slowing down the reopening of the economies in the states because you have some restrictions in place. In a number of states, they were lifted while the coronavirus number of cases and hospitalizations were still spiking. And even when it leveled off, as restrictions were eased, we even saw a re-spiking, and it’s more difficult to shut down the economy . . . a second time.”

In Iowa, both the number of confirmed coronavirus cases and hospitalizations reached record highs last week, with an average of 4,390 cases per day—an increase of 107 percent from the average two weeks earlier, according to data collected by the New York Times. Gov. Kim Reynolds (R) has still not implemented a statewide mask mandate, but she has, however, ordered indoor gatherings of twenty-five or more and outdoor gatherings of one hundred people or more required attendees to wear face masks. Reynolds has also allowed for the reopening of most businesses, despite a rapid jump in the number of cases in November.

In Minnesota, the state saw “the deadliest week of the COVID-19 pandemic” as there were thirty-one new coronavirus deaths and 7,553 new cases as of Sunday, as reported by the Times. Although Gov. Tim Walz (D) issued a mask-wearing order back in July when the state averaged roughly around 650 cases per day, the governor has reopened the economy and most businesses, despite cautioning that “we are headed toward a deep, dark winter.”

In other states like Illinois, North Dakota and South Dakota, they have also experienced their most infectious and deadliest weeks during the month of November, confirming a second wave of the virus that’s drowning most Midwestern states.

But while a national lockdown may have harmful economic implications on unemployed Americans, small businesses and restaurants, McCallion suggested “national policy for mask-wearing, social distancing” would at least help reduce the congestion in the country’s hospital systems.

“We need a comprehensive plan from Washington. We need it before January 20, and hopefully, Congress will get around . . . to getting some sort of funding program and start getting a national, coherent policy in order,” McCallion said.