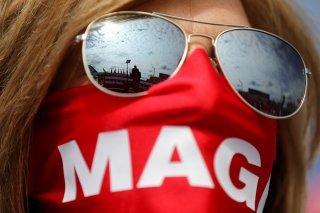 President Donald Trump is having a very good week. The polls may not show it yet, but three things turned in his favor over the last several days.

First is his own victory over COVID-19—he’s tested negative and is back on the campaign trail. Does that have any political implications? It certainly has emotional ones, and if you are inclined to think that voting is about passions, not calculation, the president’s personal comeback can only be good news for his fortunes in November. The other two big developments are the brightening of public opinion about the confirmation of Amy Coney Barrett to the Supreme Court and the latest revelations about the Biden family’s connections to a Ukrainian oil company. Data copied from a computer that was abandoned at a Delaware repair shop, obtained and published by the New York Post, shows that contrary to previous denials, Joe Biden did indeed meet with an official from Burisma, the company that paid Biden’s son, Hunter, as much as $50,000 per month for services of less than obvious market value. Did the money buy access to Vice President Joe Biden? Or did it just buy the implicit protection of a well-connected American name? Whatever the young Biden sold, it was worth a hefty payout from a company with legal worries.

The Biden-Burisma story is complicated, and the apparent corruption at the heart of it was probably of the legal kind. But the story isn’t really any more complicated than the saga of Hillary Clinton’s emails, and Democrats seem convinced that those did matter in 2016. And Facebook and Twitter are taking the possibility so seriously that they have taken extraordinary steps to restrict access to the Post story on their social networks. A new rule has even been promulgated: supposedly hacked information cannot be shared, though this rule would mean that sharing news from Wikileaks or the mainstream media outlets that published stories based on its information would be forbidden. But the social networks had to squelch the story because it was spreading rapidly before they curbed it. That suggests there’s a great deal of public interest in it. And censorship only tends to sweeten the appeal of forbidden fruit.

As for soon-to-be Justice Barrett, by a margin of 17-points, a plurality of public opinion is in favor of her confirmation, and that was before the hearings began. Senate Democrats have yet to land a blow on Barrett, who is a sterling model of what suburban voters want their daughters to grow up to be. The Barrett nomination was always going to be a boost to the president’s support among core Republican social conservatives. But it’s also an embarrassment to NeverTrumpers, who have tried to drive a wedge between values voters and the president. Trump critics who do support Barrett show that they are rejecting not only Donald Trump, but also the values of Christian conservatives and constitutional originalists. NeverTrumpers who do support Barrett, on the other hand, demonstrate why President Trump’s re-election matters—their actions nullify their words. Attacks by progressives on Barrett’s Catholic faith and family of seven, including two adopted children from Haiti, also serve to remind religious voters and parents that an influential part of the Democratic Party’s activist base simply hates them. Barrett is a win for Trump with social conservatives, but she’s also a win for him with normal people. Married women who have been reluctant to back Trump now have all the more reason to come home to the GOP in November.

But Trump trails by double-digits in national polls, and if his numbers are better in all the battlegrounds, there too he is far enough down in enough states that conventional opinion is prepared to write his chances. Trump is competitive in Florida, but in Pennsylvania, Michigan, and Wisconsin he typically trails by about 7 points. Biden looks to have rebuilt the “Blue Wall” that was supposed to guarantee Hillary Clinton’s election. Polls even show him with a good chance of winning Ohio. What can the president’s COVID recovery or the twisted Biden-Burisma tale or the Barrett hearings do to overcome such deficits? Maybe they can help Trump avoid a blowout defeat, even that might be wishful thinking for Republicans if things turn out the way all the experts predict.

All but one of the experts, perhaps: President Trump is fond of retweeting numbers from the Democracy Institute, whose polling director, Patrick Basham, defends his small firm’s predictive record in a Forbes interview by citing success in calling the Brexit vote and Trump’s 2016 win. Basham argues that other 2020 pollsters are over-predicting turnout and oversampling Democratic voters. “With most of the mainstream polls—New York Times, CNN, the university polls,” he says, “a fundamental assumption is that the electorate—aka turnout—will be much, much larger than 2016. 10-30 million more, that’s 25-30% larger. That makes it essential that polls capture many, many more Democrat voters.” Basham assumes otherwise, and he also believes, based on his surveys, that there are a significant number of “shy Trump voters” who are reluctant to tell pollsters their real intentions. It was the detection of such “shy” voters in favor of Brexit that allowed the Democracy Institute to predict correctly the outcome of the UK referendum.

Skeptics of the “shy Trump voter” hypothesis have noted that it directly conflicts with another hypothesis optimistic Republicans have entertained, namely that anecdotal reports of large volumes of Trump yard signs compared to Biden signs signal a groundswell of support for Trump undetected by the polls. Yard signs aren’t shy, and besides, doesn’t the dearth of Biden signage in Republican-leaning rural mean that there might be shy Biden supporters as well? Why assume that voters who lie to the pollsters are more likely to lie about supporting Trump?

The obvious reason is that public morality, shaped as it is in national politics by major media hostile to President Trump, influences even the way Trump voters express themselves in telephone or Internet surveys. A point Basham touches on only lightly, but which deserves weight consideration, is the possibility that many eventual Trump voters are not just lying to the pollsters, they’re lying to themselves. All people want to be morally good, and for most people what constitutes being good is being good in the eyes of others. Adam Smith long ago explained moral behavior in terms of an “impartial spectator” that personifies an individual’s (socially shaped) idea of disinterested probity. One can go farther and suggest that people build, in effect, moral doppelgängers of themselves in their own minds: the real John Doe skips church and votes for Donald Trump; but the moral John Doe, the man John Doe sees himself as in his own mind, dutifully attends church and votes for the right candidate as instructed by moralists in the media. The fact that audits of church attendance regularly show fewer persons in the pews than polls would lead you to expect is well known example of this phenomenon. People tell pollsters they have moral habits, but they don’t. And as far as public morality molded by the mainstream media is concerned, voting for Donald Trump is just about the most immoral thing of all.

So far, so dubious. But there’s more—such as Biden’s weakness among Hispanic voters. One state routinely overlooked in tallies of battlegrounds is Nevada, won by George W. Bush in 2004 and, more importantly, lost by Biden to Bernie Sanders in a blowout 18.9 percent to 40.5 percent rout in the final vote of this year’s Silver State Democratic caucuses. Biden leads in most recent polls there by 6 to 7 points, but an Oct. 7-11 poll conducted for the Las Vegas Review Journal and AARP Nevada by WNP Intelligence found that Biden had only a 2 point lead, 44 to 42 percent—well within the poll’s 4.4 percent margin of error. Nevada is as much of a battleground as neighboring Arizona. Biden is at risk in both states if he underperforms with Hispanics, as he notably did against Sanders throughout the Democratic primary season.

And then there’s under-polled Virginia, which Hillary Clinton won by just over 5 points in 2016—when she had the commonwealth’s popular senator and former governor Tim Kaine on her ticket. The latest presidential poll for Virginia rated better than a “C” by FiveThirtyEight.com was a Sept. 9-21 Christopher Newport University survey that found Biden ahead of Trump by 5 points. If there is indeed a nationwide swing away from Trump on Nov. 3, Biden could win Virginia by double digits. But a surprise swing in the opposite direction—like the one that almost knocked Virginia’s other Democratic senator, Mark Warner, out of his seat in the 2014 midterms, against an opponent who’d been considered as hopeless as the conventional wisdom now considers Trump—could deliver this non-battleground to the president, even if he loses in places like Michigan or Wisconsin. While it’s true that the 2014 midterm is not a good benchmark for the 2020 presidential election, given the historic advantage that the party out of power has in midterm elections, the 2018 midterms are a poor indication of what’s in store for 2020 for the same reason. Barack Obama suffered big losses in both the 2010 and 2014 midterms—big enough to cost his party control of first the House, then the Senate. Yet he won re-election in 2012 comfortably enough. Trump faces a tougher time, but the results of 2014 and 2016 have to be weighed alongside the results of 2018 and today’s polling in assessing the parties’ relative power. The Republicans are not down or out in the long-run, and their recent wins (and close losses) upset conventional wisdom.