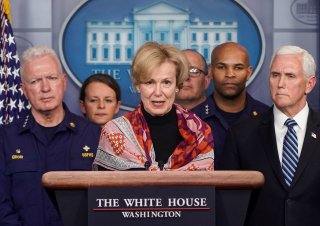 On February 26, President Donald Trump appointed his Vice President Mike Pence to lead the Coronavirus Task Force, responsible for overseeing the response to America’s worst public health crisis in the past century. But while he may open some administrative doors, Pence is a politician with no experience in medicine. So, who is really in charge of the coronavirus response? Meet Dr. Deborah Birx.

Born in Pennsylvania, Dr. Birx has been involved in the sciences, entering her first public science fair when she was still in high school. Focusing on paleobotany and rocks, Birx said in a newspaper interview at the age of fifteen that “I like rocks. They're more consistent than people.”

Dr. Birx went on to get her undergraduate in chemistry at Houghton College before completing her medical degree at Pennsylvania State University’s Milton Hershey Medical Center. The same year she graduated she joined the U.S. Army as an active duty reserve officer. In 1994 she became regular active duty and retired in 2008 with the rank of colonel.

During the 1980s, Dr. Birx worked as a physician at Walter Reed Army Medical Center while also completely multiple fellowships. In one of them, she worked in the laboratory of Dr. Anthony Fauci. It was this decade that Dr. Birx would lean into the disease that has defined her public health career. It was a brush with HIV that hit very close to home.

In early 1983, before there was even a consensus on the name “AIDS,” Dr. Birx suffered excessive bleeding during the birth of her child. Before passing out, she yelled to her husband, ordering him, “Do not let them give me blood!” The batch on hand was later found to be contaminated with HIV.

For over three decades since Dr. Birx’s career has been focused on combating the spread of HIV/AIDS in the United States and around the world. She spent most of the 1990s directing either the Defense Department’s retroviral research division or the military’s HIV research program, conducting clinical trials and attempting to find a vaccine.

By 2005, she was appointed to head the Center for Disease Control and Prevention’s Division of Global HIV/AIDS, where she remained until 2014. That year President Barack Obama selected Dr. Birx to lead his administration’s AIDS response, holding the twin titles of Ambassador-at-Large and U.S. Global AIDS Coordinator. She was confirmed by the senate through voice vote.

And now Dr. Deborah Birx serves as the coordinator for the White House’s Coronavirus Task Force, with Vice President Pence referring to her as “my right arm.” She has proved to be one of the few Obama era appointees to develop a positive rapport with President Trump, often standing beside him and answering questions during his daily press briefings on the disease.