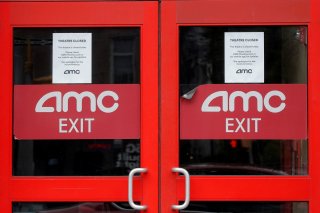 Few industries have been hurt as badly by the coronavirus pandemic as the movie exhibition industry. Virtually all theaters in the United States were closed for months, and while the major chains have since re-opened, it’s clear that many moviegoers are not yet comfortable returning to indoor theaters, and may not be for a while.

AMC, the largest chain in the U.S., has been reopening theaters in most American jurisdictions where doing so is allowed, while occasionally engaging in financial machinations in order to stay in business. AMC decided not to close its theaters earlier this month when rival Regal closed theirs.

Now, per Variety, AMC is warning of potential bankruptcy.

In an SEC filing this week, which pertained to an equity distribution agreement with Citigroup Global Markets and Goldman Sachs in which AMC will sell up to 15 million class A shares, AMC warned that a lack of liquidity could lead to restructuring.

“In the event the company determines that these sources of liquidity will not be available to it or will not allow it to meet its obligations as they become due, it would likely seek an in-court or out-of-court restructuring of its liabilities, and in the event of a future liquidation or bankruptcy proceeding, holders of the company’s common stock would likely suffer a total loss of their investment,” AMC said in the filing, Variety reported.

An earlier warning had stated that AMC could run out of money.

“We will require significant amounts of additional liquidity and there is substantial doubt about our ability to continue as a going concern for a reasonable period of time; holders of our Class A common stock could suffer a total loss of their investment.”

It’s not only AMC who has addressed the trouble the virus is causing the movie theater industry.

The CEO of AT&T, John Stankey, addressed the future of theatrical exhibition in the company’s earnings call earlier this week. AT&T owns Warner Brothers, the studio that released Christopher Nolan’s “Tenet,” the highest-profile film that braved a theatrical release during the pandemic. The film did not have a strong box office performance domestically, but it performed better overseas.

“Theatrical work is underway as well. We're doing the work for theatrical production. The question is, what does exhibition look like? And that's still kind of one of these things we don't have great visibility on. If we -- we've done some experimentation,” Stankey said on the call, per a Yahoo Finance transcript.

“I can't tell you that we walked away from the Tenet experience saying it was a home run. I'm happy we did it. I think the team was incredibly creative. I think we learned a couple things about what we can do. I actually believe that if theaters were open nationwide, if California and New York were open, we have some latitude to be able to do some of these geographic-specific releases and work through that.”

Image: Closed signs are seen on an AMC Theatre during the outbreak of the coronavirus disease (COVID-19), in New York City, U.S., April 29, 2020. REUTERS/Brendan McDermid