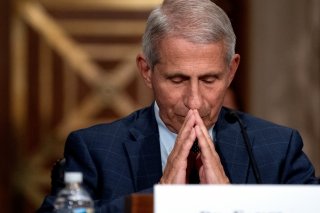 Largely due to the highly transmissible Delta variant, new coronavirus cases are hospitalizing Americans at rates not seen since last January.

Currently, the latest estimates indicate that more than a hundred thousand Americans are hospitalized with the virus, with the highest numbers seen in the South where vaccination rates lag behind other regions of the country. That figure is more than six times higher than what was seen nine weeks ago, the U.S. Department of Health and Human Services confirmed.

The seven-day average of daily new coronavirus cases now stands at approximately one hundred fifty-one thousand—which is more than ten times higher than just two months ago and about eleven percent higher than the week before, according to the latest data by Johns Hopkins University.

“If you are not yet vaccinated, you are among those at highest risk,” CDC Director Dr. Rochelle Walensky noted during a White House press briefing earlier this week.

“Do not underestimate the risk and serious consequences of this virus. Vaccines are the best tool we have to take charge of this pandemic,” she continued.

“I would like to appeal to the people in the country who are not vaccinated to realize that we have the capability among ourselves to essentially cut down the time frame to getting to the end of this pandemic,” the head of the National Institute of Allergy and Infectious Diseases said.

“Get vaccinated and the time frame will be truncated dramatically,” he continued.

Nearly fifty-two percent of the U.S. population is fully vaccinated, while about sixty-two percent have had at least one shot, according to data compiled by the CDC.

Fauci added that the recent full approval of Pfizer and BioNTech’s coronavirus vaccine given by the U.S. Food and Drug Administration will likely mean more Americans will feel comfortable with getting inoculated.

During a recent interview on CNN, he contended that there is a possibility that the United States could get the pandemic under control by the coming spring.

If “the overwhelming majority of the ninety million people who have not been vaccinated” now get the shot, “I hope we can get some good control in the spring of 2022,” he said.